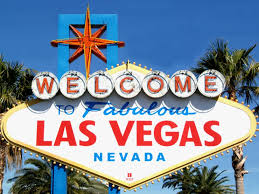 Well, can you believe that only about one week after publishing my last blog post I am here back at it again. May not be as long as my last post but I am determined to keep writing!  In fact, I will be taking two more short trips in the not so distant future and my goal is to share at least something about all these adventures.

Ok, so how did we wind up in Vegas?  In about November of 2021, my dear girlfriend threw an invitation out to all her friends to come and join them in Vegas to help them celebrate their 25th anniversary for four nights in Sin City.  They had their whole itinerary planned, including where to stay, what to do during the day and where to eat lunch and dinner.  We were discouraged about the midweek plan, but with a little arranging, we were able to join them for three days and two nights.

As per the unusual..I had nothing to plan.  Every time we have been to Vegas we have stayed right in the central strip, spent the day on the Strip, went to shows on the Strip and ate dinner on the Strip.  This time we weren't spending anytime on the Strip.  We were headed to off Strip dining, off Strip drinking and off Strip play, and it did not disappoint.  So let me tell you a bit about it! 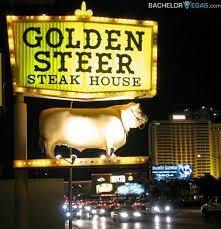 Park MGM (formerly the Monte Carlo).  The Golden Steer is your typical OLD Las Vegas Steakhouse.  The front is illuminated with a yellow marquis sign bragging its 1958 establishment and there are no windows on the front wall.  Indoor the theme continues, with wood paneled walls, booths upholstered in red leather, the bar front and center, and plenty of pictures of Frank Sinatra.  The restaurant has been host to the "famous and the infamous" as the website says, like Elvis Presley, Mario Andretti, Joe DiMaggio and Natalie Wood, hmm, strangely all Italian, except that Russian young lady, who probably came with an Italian.

The cocktail list is the kind that lists five different gins and ten different vodkas, as if I'm supposed to know the difference between them.  I'll have a gin and tonic with a splash of grapefruit, please. There is also an extensive wine list (I did not see a red under $100).  The order of the day is steaks and they are pricey, with the cheapest item being a $58 10 oz prime rib.  We were lucky enough to be offered a special which including a tomahawk chop with two salads (we both chose Caesar, tossed at the tableside) and two sides (we chose a loaded potato and steamed asparagus) for $210.  All three couples at the table ordered it. There are also multiple market priced surf and turf options and a few Italian specialties.

Dinner was good, and the company fabulous.  We were there for nearly three hours. The food was not the best I have had.  My steak was fatty and the asparagus was a bit tough. Our bill was over $1100 for the 6 of us, making it close to the most I ever spent for two of us.  Worth it? Borderline for the food but the ambiance cant be beat. 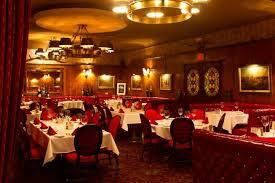 Now we are talking!  Herbs and Rye is also on West Sahara Blvd at 3713.  From the outside the place looks like a block with no windows, a flat roof, a cheesy marquee, and a big red door.  But inside, gosh, it's happening.  We were there on a Monday night and at 8:30pm the place was packed.  The decor of the dimly lit dining room borders on similar to what we saw at the Golden Steer, from the leather booths to the red velvet wallpaper, but the place has a less dressy feel.  There is no dress code.

The Herbs and Rye website says that it makes "pretty good steaks and REALLY good cocktails"  They aren't kidding.  The cocktail menu is two full pages of original libations listed categorically under what "period of alcohol history" they fall into i.e The Rat Pack Era, Prohibition.  The drinks are all about $15.  I ordered a gin and lemon drink called "The Bees Knees" which was delicious.  There was a happy hour special running (at 8:30?) which offered all well drinks for $5.  Very very tempting to go for the cheap stuff but none of us could pass up the chance at one of the fun original cocktails.  The wine list is also extensive and our friend ordered two bottles whether we needed them or not. The mark up on the wine was also not nearly as severe, and we did finish it off !

The menu has a similar selection to the night before but is a far better value, with many options that were half off.  I had the Herb's and Rye favorite, the Pork and Figs, a lovely (and better tasting) pork chop on a bed of mashed potatoes served with sweet figs.  With this I ordered a side of Sprouts and Swine, which was roasted brussels sprouts with huge chunks of bacon sprinkled with parmesan cheese.  Heaven-seriously.  Around the table was a surf and turf, a pasta carbonara, two pasta agnolotti, and even a stab at another steak.

This restaurant hands down was my favorite of the two. Our share of the bill was literally $200 less than the night before!  Almost 50% less for what I thought was a better meal with better drinks.  Well, I guess you don't know until you try! 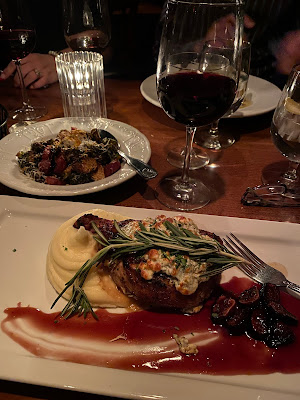 My beautiful Pork and Figs and Sprouts and Swine
at Herbs and Rye.  So yummy!

Craig and I had some time around lunch and decided to head to Frankie's Tiki Room.  Well, the downside of this renowned establishment is the fact that there is no food served there and we were getting hungry!  So our next choice was The Golden Tiki, located at 3939 Spring Mountain Road.

The bar is open 24 hours and serves light snacks during the day with some more substantial offerings at dinner. The outside continues with our current theme of just being a store front with a marquee sign and no windows facing the parking lot. You can make a reservation but when we arrived, which was about 12:30 pm, we could pretty much has our run of the place so we got a nice cozy booth in the corner.

What a place!  It's part Disneyland, part Hawaii, part Vegas.  This place is decorated to the hilt with tiki paraphernalia including torches, tikis, shells, flotsam, nets, shrunken heads and the three dolls you'd find doing the hula in 'It's a Small World.'  There is a lot of borderline artwork and a fair amount of decor that is just downright naughty--thank goodness more nudity than pornography.  The bar is 21 and over, and for good reason. Welcome to Vegas.

The drink menu is two full pages-with offerings such as the Painkiller, Piranha Punch, Trial by Fire and Hemingway's Ruin.  I got the Navy Grog with a shot of 151 shot of fire included.  Craig got the Mai Tai.  All drinks can be fortified with an extra shot of rum for 3$.  And back to Disneyland, the Golden Tiki offers boozed up classic dole whip, omg.  The drinks are tasty and fun, but do have a fair amount of ice.  If you want to get lit, go for the shots.  My second drink was The Kraken and Craig had the Huka Pele.  Yep, we were feelin' it after that.

We did eat while we were there, just one appetizer, the Sticky Fingers.  It was just a bite for 15$ but was tasty and took the edge off the hunger (and the buzz) 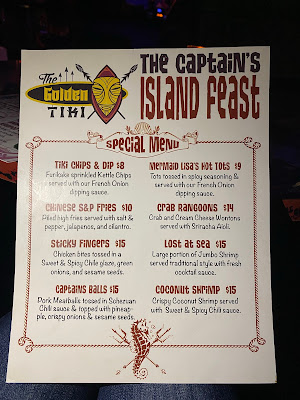 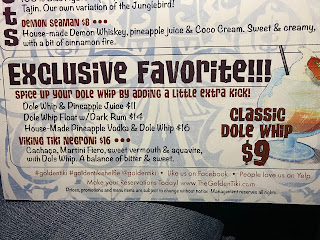 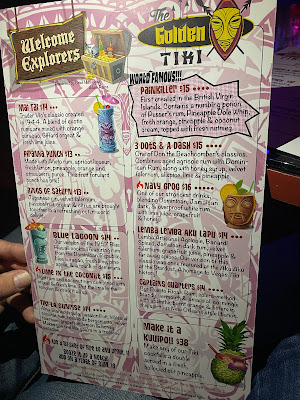 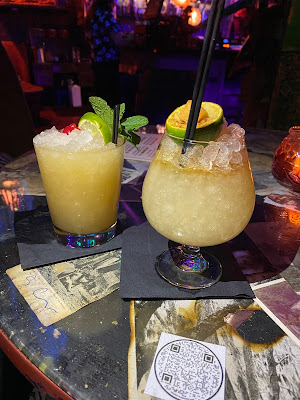 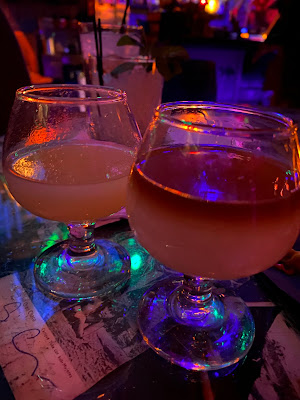 and our second drinks!! 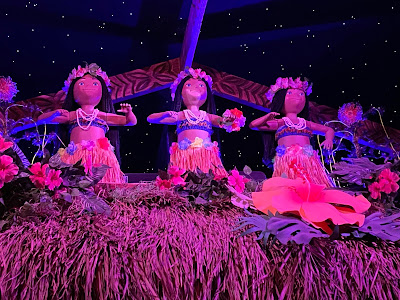 and the three young ladies that lost their way
from Disneyland 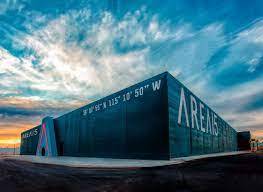 Now this is an interesting place!  We walked from the Golden Tiki about one mile to Area 15, which is located at 3215 S Rancho Drive.  Area 15 is the newest retail and entertainment center in Las Vegas.  I guess it is best described as an immersive adult playground, though you do not need to be 21 to get in.  There is no cover charge until ten pm on Fridays and Saturdays, at which times you will need to pay $15 to get in.  After 10pm the place also becomes 21+.  At all other times, you pay by the experience.

Maybe the hardest part of coming to Area 15 is deciding how you want to spend your time.  The experiences are not cheap and a few hours spent here could certainly set you back several hundred dollars.  Our friends got there while we were still gawking at imbibing at the Golden Tiki, so they had already enjoyed a sub par zipline experience and had moved on to throwing axes.  We were going to have to pay full price to join them midway into their game so we decided to sit it out and just sit and watch and drink which they (meaning the establishment) did not seem to mind.  We were going to move on to a distillery tour (yes also in Area 15) but we had all had a few by then and $55 seemed like a lot to put ourselves over the edge. (So we went black light mini golfing at Bally's instead--but that is not part of this blogpost)

Anyway, back to describing some of the experiences... I got an email that they had just added "Liftoff" which is somewhat of a Hot Air Balloon ride that takes you 130 feet (that doesn't seem very high) into the air.  That's 18$ with no alcohol.  There is Meow Wolf's Omega Mart, which I can't even describe which is $49.  There is an immersive Van Gogh exhibit, general admission $35, more for the immersive experience.  The website localadventurer.com includes these last two, our passed up distillery tour, 'Museum Fiasco' and 'Wink World' as "5 Things you can't miss at Area 15."

Listen, I'm game.  I'm going back.  At least to get my chance to throw axes.

This is supposed to be video, but you get the general idea!

Thank you for reading this post!  I am off to Carmel in a week or too.  Hopefully I am jumping back on the posting bandwagon!