It is strange that in the midst of a pandemic that has seemed to prevent any type of opportunity,  our worst enemy coronavirus made it possible for us to take a trip we could not have taken otherwise.  Last year we had figured would be the last we could destination ski over the February break.  We would have two children away at college who would not have a break in their school schedules and the third would be starting his first varsity baseball season.  Well, with NONE of my kids actually attending live classes and baseball practice nowhere on the immediate horizon, we had an opportunity and we grabbed it.  Not only were the four of us that live at home going back to Sun Valley, our oldest daughter, who had not been able to join us the previous two years, was coming from San Diego to ski with us in Idaho.I really needed this trip.  I was really done with all the COVID crap in California and even worse, Santa Clara County.  There was nothing that was going to stop me.  In the weeks and months preceding, it seemed like we got bad news after more bad news.  There were times however I wondered if this vacation was actually going to happen.  About one month prior, Alaska changed all our flights around, making it virtually impossible for all of us to meet up at the Boise airport.  We were able to fix things, but now the flying was not so easy.  About ten days before the trip, I had my family on lockdown, trying to prevent any unnecessary exposure, but lo and behold, my son managed to get exposed to COVID anyway at baseball conditioning, literally 8 days before we were to leave.  I knew he wasn't going to get it, but a 10 day quarantine was the rule, negative tests or not.  There was no way we were not going but getting on a plane was pretty blatant, so we drove.  We cancelled the flights, packed the car, bought groceries, changed the oil, made a hotel reservation in Reno, left a day early, and drove 12.5 hours to Sun Valley, ID.

SKIING DURING THE COVID PANDEMIC:

Honestly, I have to say that between the weather, the snow conditions, the location and the company, these were the three best days of skiing we ever had in our lives.  Now for me to say that, we must have been very minimally impacted by COVID restrictions. There were restrictions in place, but they did not seem to have the same oppressive nature experienced in other walks of life.

It was my understanding that they were limiting the number of tickets being sold daily, but you did not have to make a reservation.  I bought my tickets about a week in advance.

Probably the biggest accommodation made for COVID came in the form of lift operations.  Instead of packing the empty seats with singles and awkwardly putting people who don't know each other on a painful ten minute ride up the mountain, it was no longer permitted to ride with some one you did not know.  As the chairs are mostly quads, we were forced into a group of three and a group of two.  Two separate household singles could ride together but at opposite ends of the chair.  Though the gondola seats 8, you could not ride with someone you didn't know.  All this spacing did effectively make the lift lines a bit longer, especially the Saturday the gondola was closed, but it was still nothing like what I used to experience during ski week in California.  Face masks were required while in line and this was enforced.  I think there was some weak effort at keeping people six feet apart in line, but this was not enforced.

You did not have to wear your mask while skiing or while riding the lift, but quite frankly, when ya get up to a good speed you really do want that thing on or risk freezing your face.  You do have to wear it outdoors on the grounds and inside the lodge in the bathrooms and when not seated at your table.  Another nice thing is that everyone is just wearing those tube neck gaiters anyway, not those awful blue medical masks, so it's almost just part of your ski gear.

There are far fewer tables in the lodge.  There are signs encouraging you to limit your time at the table.  You can no longer toss your bag in a corner (now people just toss them outside).  No more free cubbies, but there is a very easily accessible bag check ($7 per day).  No more water glasses and water cooler. No live music. There is a fairly lively bar scene set up outside with some of the coolest space heaters I have ever seen.  You can still eat food brought from home in the lodge and no one bugs you about it.

A big big thank you to Snowcreek Apartments (where we stayed for the third time) who decided adults could be intelligent enough to follow some simple rules and allowed the hot tub to be open!  The hot tub was limited to 8 adults and this was self enforced.  Two nights we had only one other couple join us,  The third night there were 8 adults already there when we got there, so we turned around and went back to the apartment and enjoyed hot showers instead.  Go figure!

Another item worth mentioning is that our decision to drive required us to spend the night in Reno Nevada where we went once again for a great INDOOR meal.  When we crossed the border into Nevada from California I literally fist pumped.  So sick of all the restrictions here.  Obviously, both Idaho and Nevada have shown that in fact you can be indoors during a pandemic and not get sick.

AND WHAT'S NEW ON MOUNT BALDY??

Though the past two years had left us believing that Sun Valley, ID was the next best thing to Siberia, this year we actually saw double digit temperatures!! Though the first day hovered at about 20, the second and third days hovered around 30!  The first day I didn't make it two hours before shedding a T shirt which I wound up carrying until lunch AND my glove liners, which I never wore again.  The second day I braved shedding yet another layer and by the third afternoon, I, dare I say it, shed my fleece sweater as well.  You still had to wear a lot of clothes, 4 layers at the minimum instead of 7, but it was nice not feeling so much like a stuffed turkey AND not having numb fingers and toes.

Sunrise Expansion of 380 acres and a new lift:

Since last winter, Sun Valley has completed the Sunrise Expansion, which is the biggest expansion of terrain on Mount Baldy in two decades.  The expansion, which officially opened on February 3, 2021,just two weeks before we arrived, added 380 acres, or an additional 20% of skiable terrain.  It is largely considered to be an advanced/expert area, including open bowls and steep chutes.  We stayed out of that stuff, but most noteworthy for us was the replacement of the dilapidated 2 seater Cold Springs chair (circa 1970) with the slick detachable high speed Broadway Express Quad Chair. The chair drops you at mostly the same place as the Cold Springs chair did, but begins over a 1000 feet farther down the mountain.  The new chair reminds us of Peter Pan in the way it whips you into position and then shoots you off into flight.

AND NOW FOR MY NEW LITTLE APP-STRAVA!!

About a month ago I was turned on to this cool little app while trying to find a GPS type tracking system for my hikes, walks and rides completed during my daily exercise.  The super cool thing about Strava is that can track all sorts of activity, including in line skating, canoeing, swimming, and yes, SKIING.  I actually didn't turn it on until the third day.  I turned it on in the morning and then separately in the afternoon.  Super fun to see that we skied nearly 47 miles and 33,000 vertical feet over the course of the day, though I confess I think that includes the distances covered on the chair lifts.  The app also gives you a little map of the mountain that shows all the terrain you have covered.  My favorite stat, my top speed of 51 MPH.  Yea, some day I am going to live to regret that....

Hey how about we look at some more pictures!! 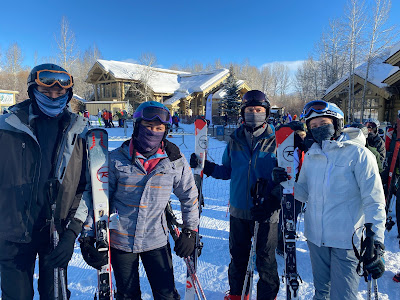 Ready to ride the Gondola!! 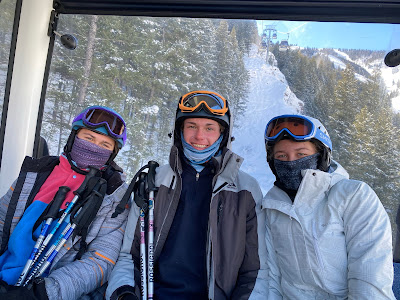 A cozy ride up the hill 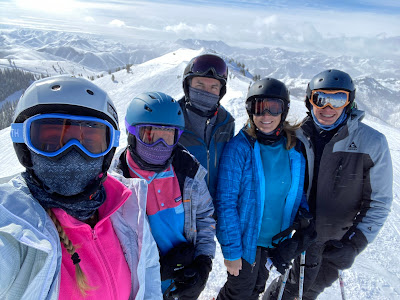 Ready to brave the Mayday Bowl! 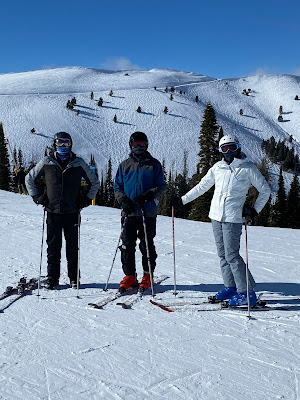 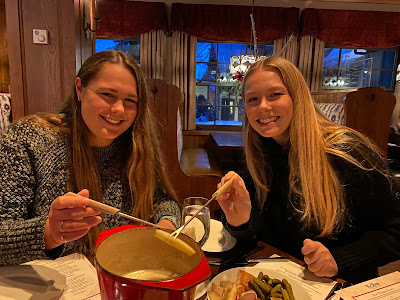 And enjoying our Sun Valley family favorite,
The Ram
Well, it has been a long time since I posted.  I sure would love to to start travelling more regularly soon!

Posted by Go Family Mom at 7:57 PM No comments: