It is so frustrating not to get the time to write.  I started another post back on Thanksgiving and now too much time has past and I just abandoned it.  So here I am again, trying to get another post written and published.  Wish me luck! 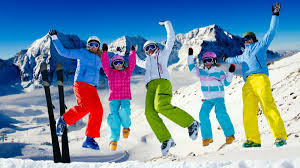 Everyone who skis has done it: the up and back.  Better defined, this is the painful and slightly insane pursuit of attempting to drive to the mountains before the sun rises, ski all day, and then drag your exhausted backside home all in one day.  In college we did this on occasion, but then I lived in Berkeley, which was one hour closer to the mountains, and I was a whole heck of a lot younger.  I hadn't done an up and back in at least 16 years.

But this is how it all came down.  As mentioned before, we told the kids that, as we were going to Disney World in February, there would be no skiing this year.  Then the rain started to fall in the Bay Area, which produced plenty of snow in the mountains. After hearing the Christmas week reports of glorious days on the slopes from our friends, Craig and I became wistful and decided we need to find some way to get up for a weekend.

OK, ..which weekend did you have in mind?  We hoped to find an open Saturday, but none came up.  My daughter's rehearsals for the upcoming school play prevented us from skiing any Saturdays. We were forced to ski on Sunday.  Really though, as skiing is so expensive, and expense was the whole reason we weren't going to go in the first place, we really planned to ski only one day.  We decided we were going to do it, we were going to brave the up and back.

If you are going to brave the up and back, of course it is best to ski in the resort that is closest and easiest to get to.  I spent some time researching and found that Sugar Bowl, Sierra-at-Tahoe, Kirkwood, Bear Valley, and Dodge Ridge all were going to take about the same amount of time to get to.  As we wanted something new and a mountain a little more challenging than previously skied, we decided on Kirkwood Mountain Resort, which is located in Markleeville along State route 88, about 3 hours and 40 minutes from our San Jose home.