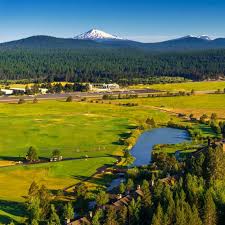 Possibly the hardest consequence of the COVID 19 pandemic is the restriction on summer travel. As the spring months waned and the hot summer months approached, almost daily I heard the sad stories of those who had shut down their precious summer plans, trips to Europe, Hawaii, Yosemite, and even Mt. Kilimanjaro.  Though some tried to make smaller plans, even more just resigned themselves to a summer without spending more than a night or two away from their homes.
Our story followed a similar path.  I had taken two and a half weeks in late July and early August nearly nine months prior for a planned excursion to Hawaii for two weeks followed by a four night stint in Lake Tahoe.  As most know, early in the pandemic the governor of Hawaii mandated a two week quarantine for all mainlanders coming into Hawaii.  When the quarantine was extended to June 30, my parents bowed out of the trip, but we hung on with hope.  On June 12, or thereabouts, the quarantine was extended to August 1, and our dreams of a Hawaiian vacation this year were dashed.
I needed to shift gears fast.  I already had the time off scheduled, so there was no way on God's green earth that we were not going on a family vacation.  We had all put up with a lot during the pandemic, and needed a vacation, so we were going, just where?  It didn't take long to make a decision.  We had been to central Oregon in the winter several times and loved the area.  I remembered an exit off the main road returning from Mt Bachelor to a place called 'Sunriver.' I googled Sunriver, Sunriver Resort popped up, it looked good, and more importantly, it was open.  On June 17, after a few nods of approval from my family, I booked it.  We got a "lodge suite" with a small kitchenette, beds for six, 2 bathrooms, a deck with a couple rocking chairs, a grassy place to play, and all the resort activities nearby.


Let's not forget the coronavirus!

Now before I rave about how positively beautiful this area is and how completely replete the region is with adrenaline pumping adventure, it's worthwhile to mention how COVID restrictions impacted the trip.  Well, Oregon is different from California, no doubt, but still is doing its part in stopping the spread of the virus.  Only a few days before we departed, Oregon began to require the wearing of masks indoors and outdoors as well when social distancing could not take place.  One huge difference (at least while we were there) was that indoor dining was allowed.  However, the amount of tables and the number of people permitted in the restaurant at one time was greatly reduced, so you really had to be smart about planning.  If you showed up about 6, you could expect to wait about an hour to be seated.  Most restaurants were also wrapping up dining by nine at the latest.  The lack of seating pushed a lot of poor planners to the grocery stores and to the takeout options, leaving the grocery shelves of hot food empty and backing up restaurant kitchens for hours.  Ever waited 75 minutes for a pizza???  Anyway, despite all this, the restaurants felt extremely safe!  All were required to wear masks unless seated at the table.  Tables were widely spaced.  Condiments and utensils were brought out individually.  All the servers wore face coverings.  Listen!  Nothing to fear!  It is frustrating that CA can't seem to follow suit.  This CAN be done!
The pool was open on an appointment basis.  Pool reservations could be made one week in advance for one of four two hour timeslots.  You were then notified of your confirmed reservation or your spot on the waitlist.  We found that the system was rather rudimentary.  With only three of seven reservations confirmed, we were only turned away from the pool once.  Once admitted, parties were separated, provided with towels and brought pitchers of water and plastic cups.  Plenty of spacing.  All servers wearing masks.  Complete safety-GO OREGON.
Another thing you can do in Oregon is workout in a gym, including on the cardio equipment, without wearing a mask.  This also required an advanced appointment.  We did this one day, after not being in a gym since mid March.  The mask rule was changed during the week, requiring the use of a mask while exercising.  Rather than risk another COVID related death from suffocation while using the elliptical trainer, we cancelled our second appointment.
Our outdoor activities (which were what we were there for) were very minimally impacted.  Basically, you wear your face covering in the marina and then take it off on the river.  If someone is hooking you into a zipline harness, you wear it, then you remove it to zip. Simple stuff. We did see some people biking and hiking with masks on, but we did not.

So here are just a few things we did in the Sunriver area to enjoy the outdoors and get some thrills.  We did all these things and more, but there was so much more we could have done.

1)  Ziplining on Mt Bachelor.  So what do you do with a perfectly good ski hill in the summer?  Open it up to ziplining of course!!  This is exactly what Mt Bachelor did on July 4th of this year.  Mt Bachelor's zipline adventure begins at the base of the mountain with a short training followed by a uphill ride on the Pine Marten chairlift.  The zipping itself consists of three lines descending nearly  1400 vertical feet down the mountain slopes.  $99 for the excursion which takes about 2-2.5 hours.  There are some height and weight restrictions so be sure to check those out on the website.  Reservations are required.
As a cable breaking or a harness failure would spell certain death, I am always a bit nervous the day before a zip, but I always seem to get over it pretty quickly and am pretty sorry when the whole thing is over. Overall, this experience was a little different from previous zips. 1)  It's a duel line, so you and a buddy can go at once.  2)  You are the braking system, so how fast or how slow you go is entirely up to you.  As such, it is your responsibility to slow yourself down before you hit the landing platform. Actually, you can come to a full stop while in the middle of the line.  Why would you though?  I unlocked that brake as much as I could and flew at max speed, which was like 60 mph, or so they say. 3)  These lines are really long, the last being over 800ft in vertical descent and 3100 feet long, so ya get going really fast! 4)  The scenery is UNMATCHED!

2)  The Paulina Plunge.  The very next day we headed about 20 miles south and east of Sunriver to the Newberry Caldera area to experience the Paulina Plunge.  The Paulina Plunge is a combination of more than 6 miles of downhill mountain bike riding and short hikes to gorgeous waterfalls and natural waterslides.  $75 for a five hour adventure.
Omigosh!  What a blast!  I literally never wanted this to end.  I think pretty much every one in our family named this adventure as the favorite of the week.  Our young shirtless guide, Brighton (sigh) learned everyone's name, ensured everyone's safety, and pointed out fun and interesting facts about the area.  We stopped at three waterfalls.  The water was pretty cold, but there was no way to not want to jump/slide in over and over again.  Really my only complaint was being a bit rushed at the waterfalls.
The website said ages 4-70, but I might add that you really need to be confident on a bike.  My family was kept near the front, being faster riders.  The slow riders were really slow.  The downhill stretches do get your speed going and if you're scared you're just gonna ride your brakes the whole way--not much fun. 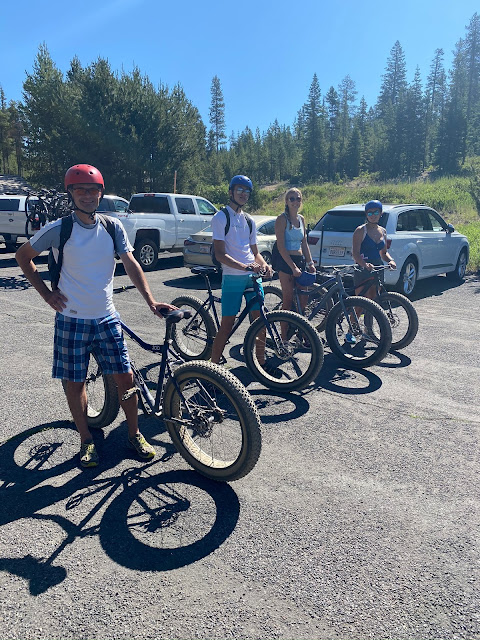 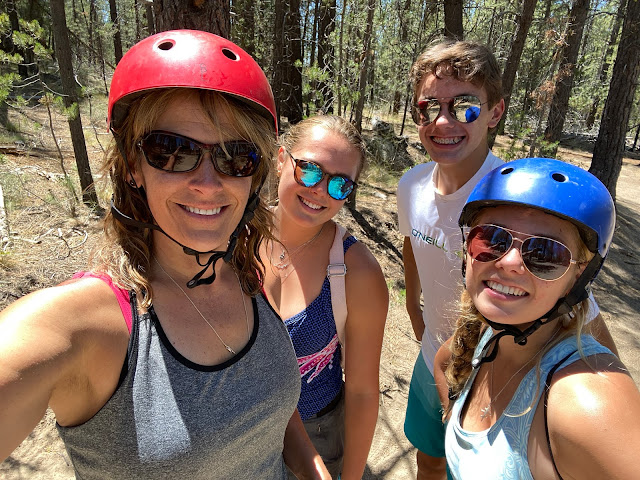 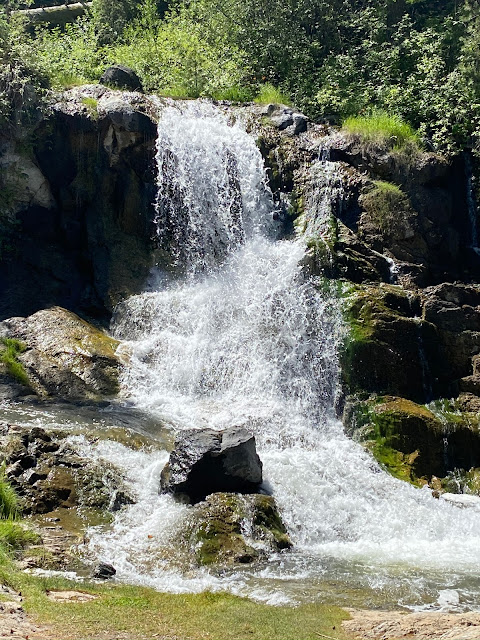 3)  Sun Country Tours-White water rafting.  I have to bravely admit that after over a half century of life, I had never been whitewater rafting.  It was one of those things that inherently scared the crap out of me and then at the same time was kind of expensive, so I just avoided it.  Well, when Sun Country Tours, with its Sunriver location just minutes from the resort, presented an opportunity to get a taste of the rapids without too much financial commitment with the Big Eddy Thriller, I decided it was time to suck up my fear and stop denying my family this adventure.
The Big Eddy Thriller is basically and introduction to whitewater rafting.  Pardon the pun, but it's meant to get your feet (and everything else) wet!  The three hour adventure, which departs about every 90 minutes 5 times a day, begins with a 45 minute bus ride.  Really there is only about one hour on the water and even less in the class three rapids, but the time in the rapids was thrilling and did get you soaking wet.  Really reminded me of the Kali River Rapids ride at Disney World  Anyway, the price varies based on your boat, but for us it turned out to be about 65$ per person with four to a raft. They run longer and more expensive trips which would definitely be an option in the future. Pictures are taken by a professional, $39 for the album.  The pictures are good quality and a nice momento, but since we had family members on two rafts, $78 was not worth it.  I would have loved to show you a picture here, but a cell phone and rafting don't mix well, so I didn't bring it.

Also recommended is renting a bike and riding 8 miles to Benham Falls, renting a raft at the Marina and floating 6 miles down the river with a cooler full of yummy Oregonian beer, and the amazing hikes in the Cascade Lakes area.  Central Oregon is stunning in the summer, and we left so much more to do.  We would definitely recommend this area and hope to come back soon!!

Here are some pictures! 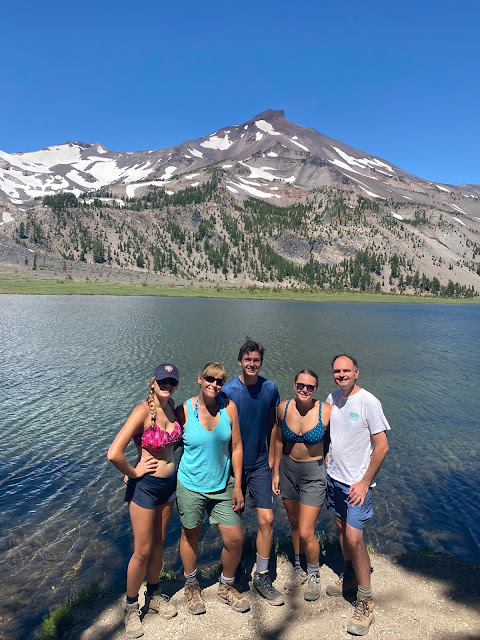 Hike to Green Lakes on the Cascades Lakes Byway 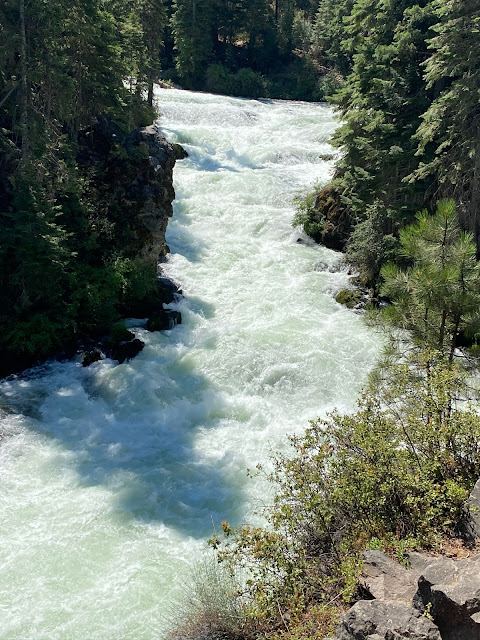 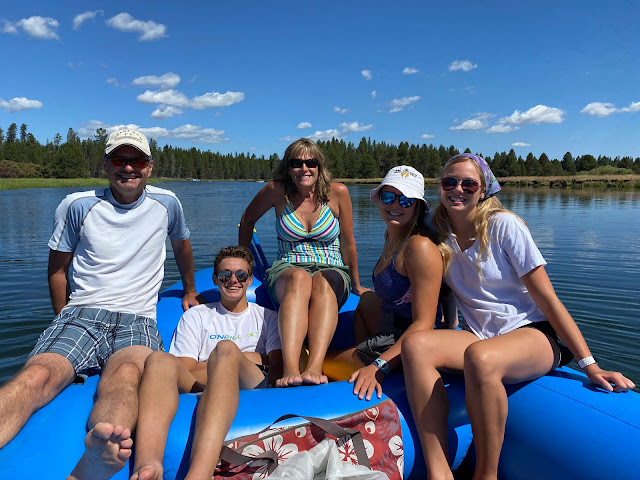 Floating down the Deschutes River 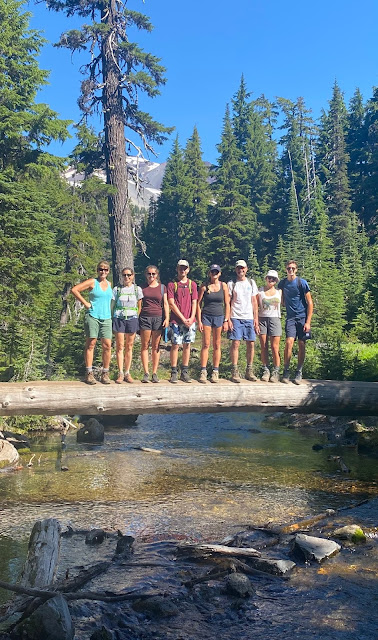 On the Green Lakes Trail

Thank you for reading this post.  Feel free to leave comments or ask questions!  Travel is limited now!  But if I can find something to post about I will!
Posted by Go Family Mom at 5:21 PM