Ya know there is one thing about writing a travel blog, and that is, if you are going to visit the same places, you are going to have to come up with some new material for the same place.  This is basically what has gone on with our return visit to Sun Valley, Idaho during the month of February this year.  There is nothing new particularly to report, but I can do a little comparing between our experiences of this year and last, and maybe reinforce or negate some of my comments from my blog about the same subject last year.

How did we end up in Sun Valley again?  Well, the same issues arose this year as last, and try as we to contact the baseball coaches and get some semblance of blessing to miss some events/practices during a period of time which was a school vacation anyway, we got no response, so as soon as I heard some vague commentary that we could leave Saturday to Tuesday, I booked it, and stretched it a day.  Next year my son will be playing varsity, and the days of leaving during this break will be over, so we decided to splurge one more year.

Well, we stayed one less day and had our skis one day less, so on some small level we minimized some expense this way, however, much to our disappointment, we were unable to get any discounts with early booking through either getlifttickets.com or any ski rental company, so we paid top dollar for everything.  Our lift tickets were a whopping $1862 for four adults to ski for three days, which worked out to over $150 per day even purchasing a multi day ticket.  Wow.

Likewise with the ski rentals.  I did not want to rent from Sturtevants again, because of their weird inability to get our rental price correct last year, but no outfit was any cheaper that allowed us to reserve in advance.  There were a lot of slightly more expensive options which had people actually come out to your condo with the equipment to outfit you, but I didn't really trust being on anyone else's timetable so back to Sturtevants we went.  They did allow us to pick the skis up the night -before, and thanks to some quick driving through the mountains following the Boise arrival at 3:50, we did make it just in time.  Again the guys are nice and the place was empty at that hour so equipment rental was smooth, though pricey--$35 per day per person, three days.

Well, the early bird catches the worm, and for that reason we did not get the beautiful 1530 Snow Creek Condo we had last year.  We did not have much time to book and there were not too many options in Snow Creek, where we knew we wanted to stay, so we grabbed the only other 2 bed 2 bath condo available at 1538, just a few steps away.  I rented directly through the property manager, Vacasa.
We knew this condo was not going to be as nice, and it wasn't.  The kitchen, bathroom and furnishings in general were in need of an overhaul.  That being said, the condo was clean and had a washer and dryer and the kitchen was well stocked, so really there was nothing to complain about.  We did have some trouble with the cable, and three out of four nights were without television, but we think this was more because of the local cable service than because of the cable equipment in the condo.
One thing I must mention is how pleasant it was to deal with Vacasa. They offered us an early check in and a late check out.  Each time I texted they responded AND acted within minutes.  Many times property managers don't come through when things go wrong, but Vacasa was right on it.  I would rent another Vacasa condo again just based on their customer service.
Now back to Snow Creek in general, since we were there last the entire Clubhouse has been redone.
It is far more modern with a much bigger sitting area and a TV and a gas fireplace.  There is a huge sign outside the door prohibiting food, glass, or ALCOHOL in the hot tub and pool area.  I can guarantee you not one person we encountered in three days of post ski hot tubbing was following that last rule.  One afternoon the board of directors for the HOA was in the clubhouse, trying to conduct some kind of interviews, and even they didn't care.

Well, last year there was a ridiculous amount of snow on the mountain and three clear sunny days, 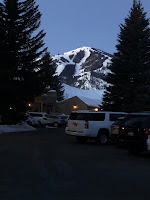 making the absolute best conditions ever.  This year we were treated to a dose of reality--still the three sunny days but some exposed grass and other debris on the runs, and at times some darned icy conditions.  Still fabulous, just a little short of heaven.  After the second day of skiing they blew some snow around, making the third day far less icy and more enjoyable. A local on the lift told me that these conditions were normal for Baldy in February.
There is word on the street the skiable terrain on Baldy will expand by 380 acres next year which will include bowls, chutes, and tree skiing.  Lower Broadway will also be extended by 3400 feet to the base of a brand new detachable lift that will replace the Cold Springs chair, which actually looks like it could crumble any minute--think Badger Pass in the 70's--so this is a good thing!

What? No, here me out.  This is really a thing.  Eating in Ketchum can be a real challenge, especially during a busy week.  A huge problem is that many of the Main Street hot spots do not take reservations, so it's first come first served, and I swear there are people that come directly from the slopes and don't leave for hours!  We tried to go to dinner about 7pm on the Sunday before President's Day.  Whoops. We tried three places, Whiskey Jacques, Pioneer Saloon, and Sawtooth Brewery Public House.  All were full.  Pioneer Saloon could at least tell us 1-2 hours but the other places told us we could hang out and wait. Well after this we wound up at the Burger Grill downtown, which was tasty and quite satisfying, if not quite what we set out to do.
The brings me to the lovely Sun Valley Inn restaurant, The Ram.  We wound up here last year when a similar dining fiasco happened.  We were all so taken with the charm of this restaurant that the kids insisted we return.  It has a Bavarian look to it, but I would not say the menu is German, though the nightly heritage dinners seem to lean that way and the draft beers are all German.  The food is fabulous.  We started with fondue and moved onto steaks and lamb shanks followed by bread pudding and ice cream.  I also had no reason to complain about my yummy gin and tonic! The service here is absolutely top notch.  The maitre'd (there seemed to be more than one) is in a suit and attends to each guest who enters the restaurant and shakes each hand as you leave.  A young lady takes your coat and gives you a claim check. The waiter is unhurried and thorough.  The ambiance is perfected by pianist Larry who plays renditions of favorite show tunes and other classics on his baby grand piano at a perfected level that still allows you to enjoy your conversation! He is especially sweet to youngsters and is able to carry on a conversation with guests while playing the piano without skipping a note!
For the record, this year we had a reservation and were here on a Tuesday night, just like last year.

Dagnabbit this place is cold, cold, cold!  Actually the first day the temperatures were slightly warmer than last year, but the second and third day were wicked.  I think the average up there was about 10.
If you read my blog last year about the cold, I listed what I wore just to survive.  The cold is truly almost unbearable.  I'm not sure it is really possible to make clothes for skiing that truly prevent frozen fingers and toes in this type of cold.  The fact is, you just have to go in and warm up occasionally.  One time I let this go a bit too long and I nearly puked from the pain of the warm blood reentering my fingers.  Thereafter I was more careful, always tucking my hands into fists on the lifts and NEVER EVER removing my gloves.
This year I made a purchase that was a godsend to all of us, Buff Multifunctional Headwear. In effect
it's like a big fleece tube you wear around your neck and pull up over your face to meet your goggles.  At $32 from REI, they were a bit pricey, but OMG, worth every penny.  Often when I make such a purchase someone has some issue and refuses to buy into the need for such apparel.  Not one of the four of us skied one minute without our new friend.
Also I don't know who in the world would be stupid enough not to, but wearing a helmet keeps you far warmer than a hat alone.  I can't believe I ever didn't wear one--what a dummy.
The morning we left we headed over a mountain pass on the way to the airport.  The lowest temperature was -16.  Unfortunately, at some point we had to stop at a rest area and get out.  It was -8 then.  That was the coldest air temperature I had even experienced.

Well not such a repetitive post after all.  And now for some pictures! 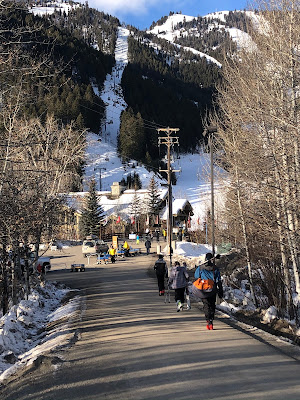 Approaching the River Run Lodge in the morning 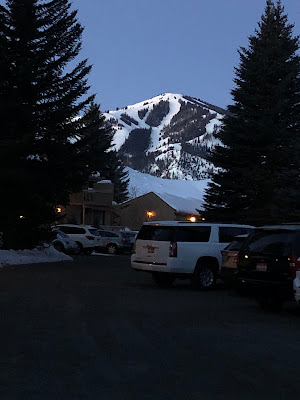 The view of beautiful Mount Baldy from our condo parking lot 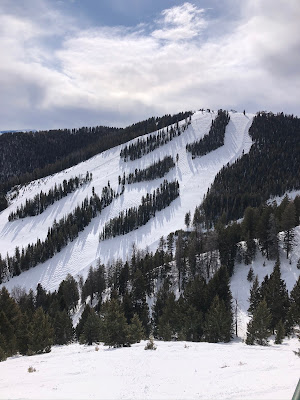 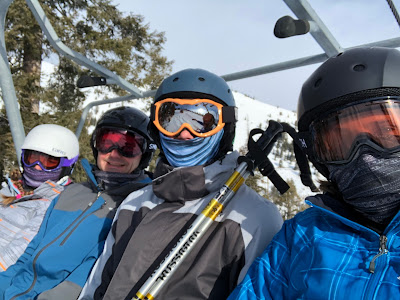 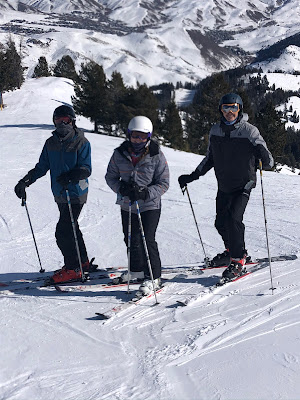 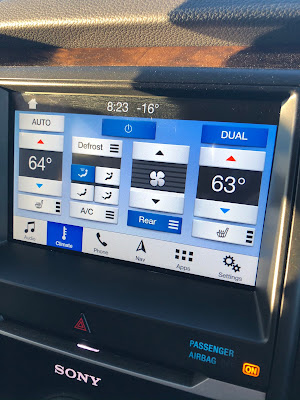 Don't even think about going out in this temperature!