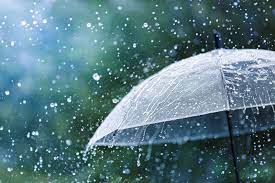 Well, if there is anything that there has been a lot of in the state of California during the month of December, it's rain.  Weather this month has been interfering with the holiday travel and activities of many a Californian, and we were no exception.  We went to Disneyland in the middle of the month and discovered before we left that there was no way were going to escape the rain.  Then later in the month, our friend visited from western Pennsylvania, and our promised day trip to San Francisco also promised to be awash in rainfall.

Anyway, this post is not about rain, but rather how we managed it and the experiences we managed to have despite the unpleasant weather in both places. 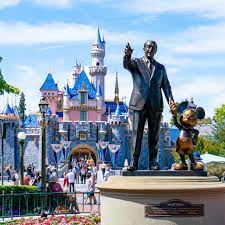 Well, we had been going to Disneyland in January over the last several years because this had worked out best for the kids' school schedules.  This year all the kids would be home and done with finals by mid December so my family suggested the possibility of going to the Happiest Place on Earth during the holiday season.  We had done this many times in the past, in the days of the now defunct "Fast Pass" system, and all I could think of was "crowded."  My requirement was that if we were going to go during this time, we were going during the week.  After much deliberation, we decided to try a three day single park ticket, which put us in the parks Sunday, Monday, and Tuesday, December 11-13, with our reservations for Disneyland Park, California Adventure and back to Disneyland Park. Our hope was with the forecasted rain and the midweek reservations we would not need to buy Genie Plus.

Ok, well I guess we can talk about rain first.  Sunday at 7:15am, the time at which we departed from our hotel to walk to Disneyland park, the city of Anaheim was under a complete deluge.  We pulled out our rain ponchos and our portable umbrellas and made the 3/4 mile trek to the park entrance.  Without a doubt the rain was keeping the initial crowds away, but when the rain stopped at about 12 noon, a lot more people showed up.  The next day as well, we walked to the park in slightly less rainy conditions and endured rain at DCA until about 9 in the morning.

Now I can't say that an entire day (or two) in a constant downpour would be particularly fun, but days like this in southern California really are quite rare.  It is much more likely that the rain will be temporary.  There are a few items that are an absolute must when rain is expected and came in very handy:  a 5$ poncho from WalMart (ponchos in the park range from about 12-14 dollars), a portable umbrella (preferably a sturdy one and not the tiniest you can find), an extra pair of socks, and a rag towel.  The ponchos cover your bottom and will assist in not sitting in a puddle on a wet outdoor ride and actually keep you quite warm.  Most indoor rides require your ponchos to be removed while you ride (I guess they are trying to keep their indoor rides dry.)  The ponchos fold up and can be returned to your rented locker when the rain stops.  We kept ours with us for riding Splash Mountain in 48 degree weather both nights.  Not a great temperature to be soaking wet, or even mildly wet!

The weather can result in your nighttime shows being cancelled. Fireworks were cancelled "due to windy conditions in the upper atmosphere" (??) Sunday night (and Saturday night apparently) and World of Color was cancelled at DCA on Monday for the same reason (though that day fireworks did go on as scheduled at Disneyland Park).  The most infuriating thing is the way Disney manages to gather every person in the park to one crowded area and then tell them at the last second that the show is cancelled. 😡 Fantasmic show (finally back!) went on as scheduled and fireworks did show on Tuesday night. 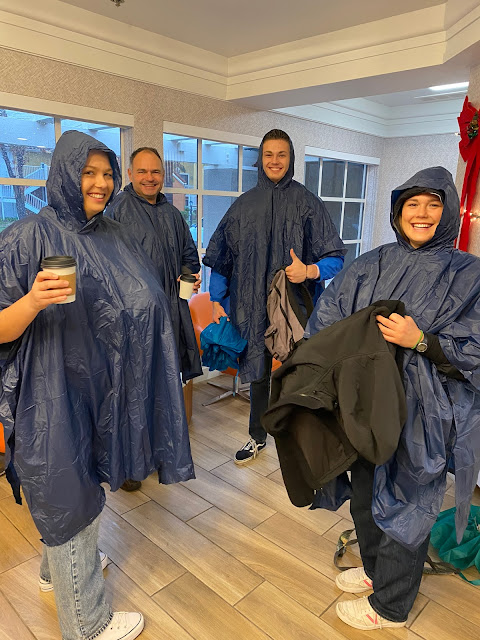 Who's afraid of a little rain??? 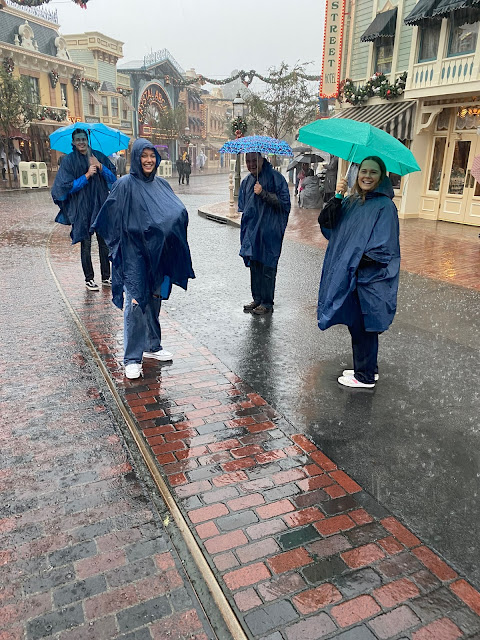 But this rain is serious!!

Well, what about those lessened weekday crowds?  Yeah, well forget that.  The only day that was a little less crowded was surprisingly Sunday at Disneyland Park.  California Adventure was beyond crowded on Monday.  This day was almost a complete disaster. On walking into DCA, nearly every ride was closed, and this lasted for most of the day, so people scrambled from place to place as any given ride would open until it broke again.  With nearly every Genie Plus ride down, the lines everywhere became much longer--causing waits where you never have waits, like for "the Little Mermaid," also which was closed for most of the day.  We were trying to avoid Genie Plus on this day so we waited in some long lines of one hour or more.  We were able to get on the Incredicoaster for the one hour it was open.  Though the line for Guardians of the Galaxy (which I don't ride) said 60 minutes,  I wound up waiting nearly two hours for the rest of my family to get off that ride..omg.  Anyway, the rides were breaking at Disneyland too.  We were on Indiana Jones when the ride stopped, the lights flipped on and there we sat for 15 minutes.  Closures all over the park on and off, but somehow at Disneyland park there are enough rides to buffer it out.  The best part about our terrible day at DCA was that we left early enough (9:15) to get home and get a decent night's sleep.

The last day after the terrible day at DCA the minute the lines got bad, we bought the Genie plus for 25$ per person which is its cheapest price.  Last year we bought it for 20$.  On Sunday it had been 30$ per person. Disney will charge whatever they want and people will pay it, it seems.

A little bit back to the prices, gosh, everything is insane.  Every cocktail everywhere is over 17 dollars.  Dinner at Blue Bayou was just under $300 with just one beer a piece for three of us, Oga's Cantina (again three alcoholic drinks and two not and no snacks) was $80.  Dinner at Lamplight Lounge, which was more like bites than actual dinner (three drinks) was 215$.  Naples, a literal pasta and pizza place, $240.  A pitcher of beer was $50.  Naples and Lamplight Lounge, by the way, were FREEZING.  At Lamplight we were placed at a bar table with a gas fire, which we had to hover over to get warm.  At Naples we sat indoors, but the constant opening and closing of the door to the patio left us unable to take our jackets off.  Maybe take some of the revenue generated by the alcohol and put it into heat.  Anyway, back to cocktails.  The yummy cocktails at the PYM lab have also gone up at least a dollar since we were there one year ago. 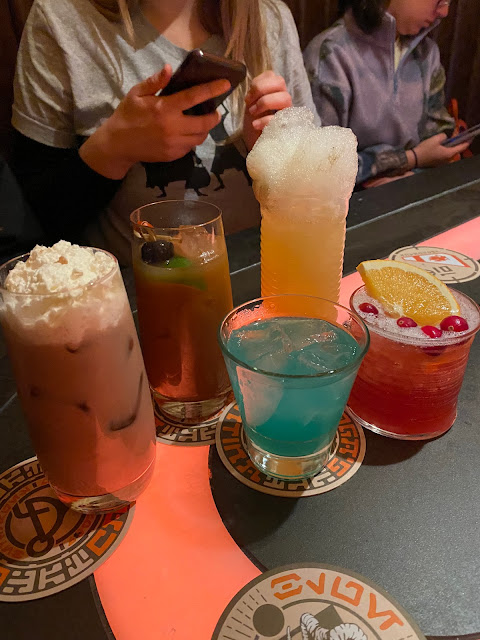 It seems like I am complaining a lot, and true, the conditions were not fabulous-but we really had an amazing time.  Genie Plus on the third day really made the day tolerable with less standing in line.  The third day rest stops at both Blue Bayou at 4pm and Oga's Cantina at about 7 pm were also helpful.  I made a promise to my kids after the disastrous second day that I would be staying until the park closed and that I would not complain about being tired even once. I was true to my word.

So the big question is what is my verdict on the choice of ticket?  Well, after some deliberation, we did decide that the two day park hopper with a Genie Plus purchase on a weekday is probably the most bang for your buck.  California Adventure just has too few rides to keep you there full day, making the Genie Plus add on almost imperative to avoid every line being over an hour.  If you were going on a weekday not in high season, it might be reasonable to try to not purchase Genie Plus, but on pretty much every weekend, you are going to need it.

Here is another picture of Disneyland! 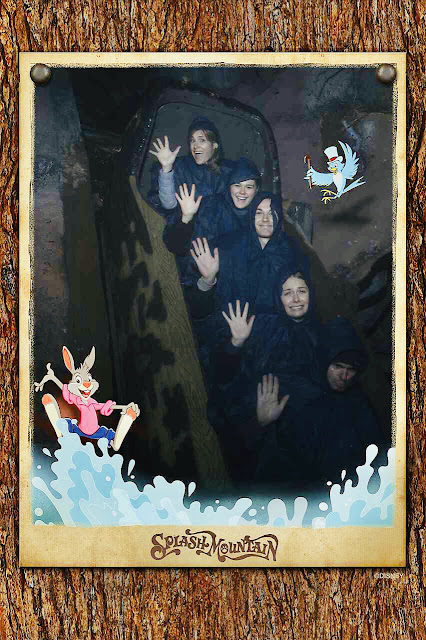 See, the ponchos can come in handy for some cute pictures as well! 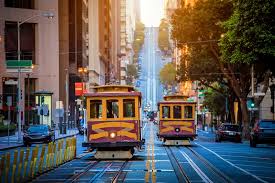 We live about one hour south of San Francisco.  We've recently joked that we only go to San Francisco for three things:  Ball Games, Weddings, and Funerals.  Actually the last time I did any form of sightseeing there was when I went with my husband to shop (if you can call that sightseeing) while our daughter did a one day job shadow.  That was 2018!

Well, our friend came from Pennsylvania and we had promised to take him to San Francisco on December 27th, but alas, what was in our forecast again-RAIN.  Outdoor walking and shopping and cable car rides were just not going to work, so we opted for a free driving tour my daughter found on the web at crosbyreport.com.  She modified it slightly and started us in the middle of the tour so we missed out on a few areas-Mission Dolores Park, the Castro, Alamo Square, Haight-Ashbury.  We did get out when we wanted to but literally in two hours we saw..

The Sea Cliff neighborhood (I didn't even know this existed)

The Presidio (great views of the city from a turnout here)

Lombard Street (we actually drove down the crookedest-is that a word?- street in the world!)

Anyway, this is a nice way to see the whole city even if its not a rainy day.  We did finally park and get out at Fisherman's Wharf where we enjoyed the Happy Hour menu at the Chowder Hut, smack dab in the middle of the wharf area.  We enjoyed Fish and Chips, Fish Sliders and beer.  There were a few fire pits in the round restaurant, but we were not lucky enough to score one of these.  After eating, it was actually getting dark, and we headed to Pier 39 to see a few seals and browse a few stores.

This area I gotta say is not what it used to be.  When I was in college we used to whip over the Bay Bridge on a Friday or Saturday night and stroll the wharf and the pier and get something to eat or maybe pop by Ghirardelli Square.   Just not that appealing anymore.  A lot of the shops were boarded up and vacant.  A lot of the famous restaurants were we used to eat before sorority formals or on special occasions, places like Neptune's Palace and Rainforest Cafe are gone. Even the crab stands at the wharf are half of what they used to be.  The worst was the demise of the beautifully classic A. Sabella's, which is now an Applebee's.  Not sure when all these changes occurred... too bad, but then again if I had frequented them with more regularity, maybe they'd still be open!

Ok, well that's enough on this long post.  I'm going to Vegas again and seeing a new show and will visit some new bars and restaurants.  Also planning to see the new Diana exhibit.  Ok, now for a few pictures! 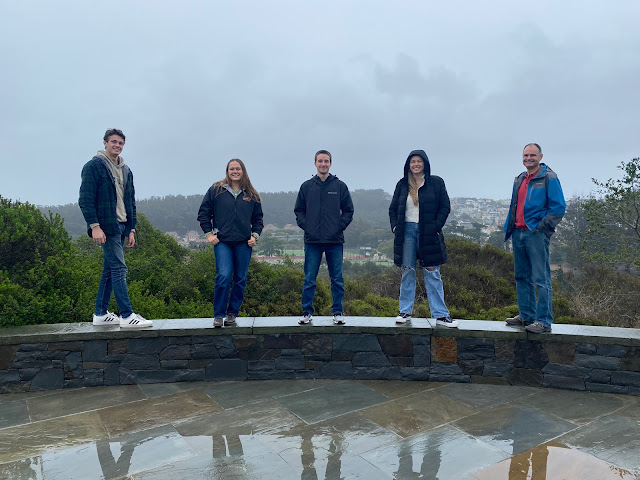 The Presidio turn out had a beautiful view 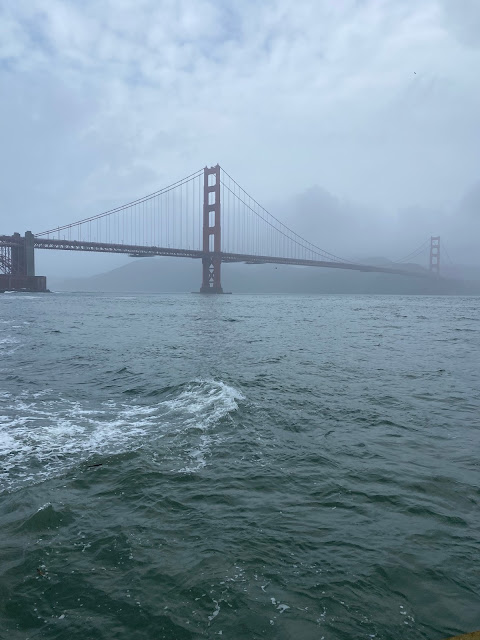 A new way of seeing the Golden Gate Bridge 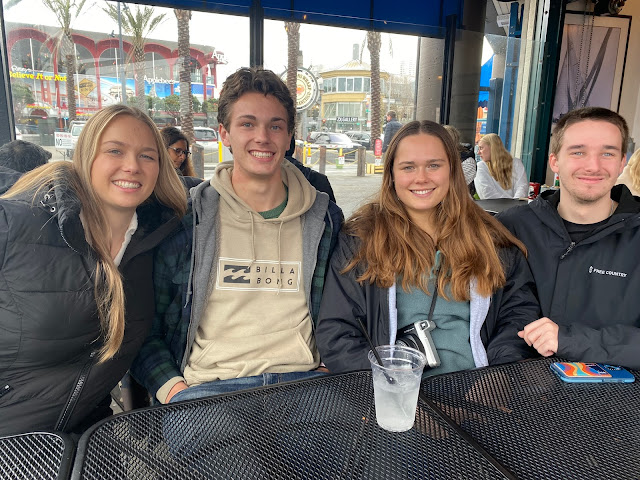 Our crew at the Chowder Hut
Our trek down Lombard Street