KNBR SF Giants Fan Fest is one of those things that happens every year but every year something happens that prevents me from going.  Since the Giants started winning World Series in 2010, I either had to work a school play, someone needed a ride somewhere, or some other social obligation came up. My daughter got to go with some friends one year and Sergio Romo (now of the Tampa Bay Rays) signed her Sergio Romo jersey.  She called me hyperventilating as if she had met the Queen of England herself, but I guess at that time having Sergio Romo sign your shirt was better than meeting Queen Elizabeth.

I had two daughters out of town so it was determined we were going to do something February 9th, which incidentally is the day before my birthday.  There were three events to choose from, and we couldn't decide so we left it up to chance and the lot fell upon Fan Fest.  Early in the week it was determined that there would be no baseball practice for freshman on Saturdays, so I loaded my car with 15 year old boys and 10 of us headed up to Oracle Park in San Francisco to mingle with our favorite players.

KNBR Fan Fest is a free annual event held at the ballpark scheduled just a few days before pitchers and catchers report to spring training.  Fans can wander the field and have access to some very cool areas usually off limits to the run of the mill audience, such as a the dugout and the press box.  As one of those that never has seats that allowed me to visit the club level, it was cool to go up there and see all the memorabilia displayed and see how those club level seats are accessed.  We had hoped the Clubhouse would be open, but it was not. 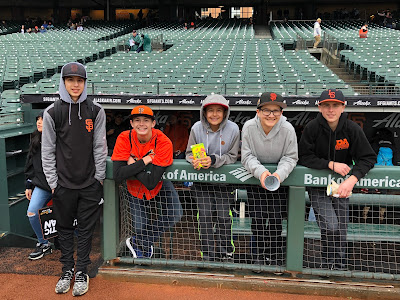 Our bunch in the Giants Dugout 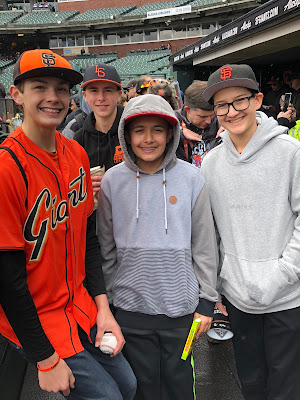 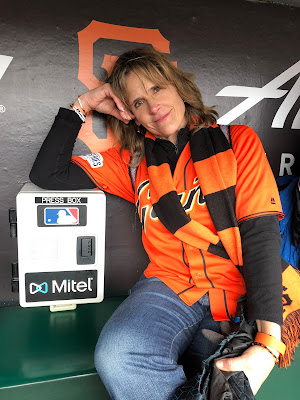 Make the call to the bullpen! 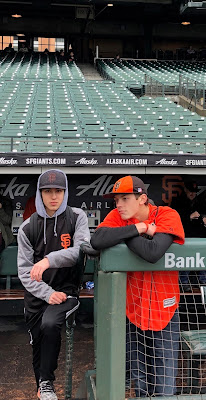 How long before we pull him, Bruce?

We were given two strong warnings.  One was to take public transportation and the other was to get there early.  One story relayed stated that a few years ago they stopped letting people in at 9:45 am!
We ran into no such problems.  We parked in an offsite lot at 470 Brannan for 15$ and lined up at the Willie Mays gate at about 9:20.  The gates opened precisely at 10 am and every one made it in without incident. 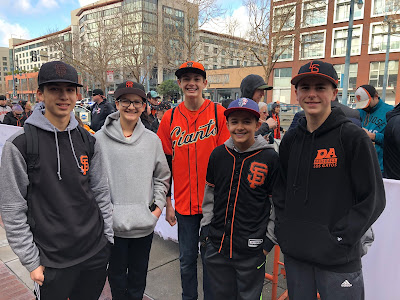 Our crew is ready to go!

There are a lot of sponsors there giving away free stuff, drink cuzzies and paper placards and the same backpack I got last year on a giveaway day.  There is lots of stuff to buy.  A lot of last years merchandise was marked down for quick clearance.  Especially tempting was the twenty dollar "mystery bag," which made it's way home with just about everyone in our party.  Once the first one was opened and the contents were discovered to not be so bad, others followed suit, particularly in the last hour of the event, when the bags were marked to two for twenty dollars.  Members of our group starting gifting them to one another.  I walked away with an Andrew McCutchen Tshirt, a rally rag, a water bottle and a Will Clark Autism Awareness Bobblehead--all likely leftover giveaways from last year.  I was pretty lucky-one of our poor boys came home with TWO Crazy Crab scarfs--the same ones we chucked out the minute we came home with them last year.

Anyway, throughout most of the day, KNBR personalities conducted interviews with players down on the field.  Despite the occasional standing in the rain, it was actually quite nice to get close and watch the discussions.  Out by "the garden", there was also a sponsored question and answer area, but we never ventured out that way.

A lot of the concessions were available and alcohol was available, though in our desire to be good examples, we did not buy any.

While all this is fine and dandy, no one comes out to the ballpark for this stuff, and neither did we.  People come out to get autographs and to meet players. From what I could ascertain,there were two autograph stations, one kids 16 and under autograph station (which came in very handy for our 15 year olds) and one selfie station.  The autograph stations were on opposite ends of the ball park, one at the top of the Willie Mays ramp and the other in the Alaska Airlines Loft at the right field wall.  The kids station was on the club level, quite appealing as it was indoors.  The selfie station was also up in the nosebleeds and the endless line in the downpour kept us away.

The lines for autographs were like waiting for Space Mountain, fully equipped with the "wait time is 45 minutes from this point" signs posted strategically. Another tricky thing is that the players/VIP's in the autograph booth once you finally get there rotate every 50 minutes, which leaves you with the very real possibility that after waiting for Brandon Belt for one hour, you could be five minutes away from having him sign your #9 jersey before he is whisked away to be replaced by Pat Venditte (actually he was really nice), so disappointment can really be a thing, but all the players/VIP's are so nice that it really didn't matter who you meet.  During the rotation the line abruptly stops moving for about 10 minutes while the VIPs change.  Another thing we noticed is that you might see the same player rotated to another autograph station--yes we actually have one autograph twice, but for the most part we did not fall into this predicament.  There are three to six VIPs at every station, so even if you are repeating one meet and greet experience, there are three others you haven't met.  There are some rules for the autograph stations.  No posed pictures are allowed, though you can take pictures of the players themselves as they sign your gear.  Also only one autograph is allowed per person, so don't even think about having both your baseball and your jersey signed.  There is no hurry once you get there. The players and VIPs, who are for the most part phenomenally well dressed and good looking--sigh, are polite, make eye contact and are up for a little conversation. 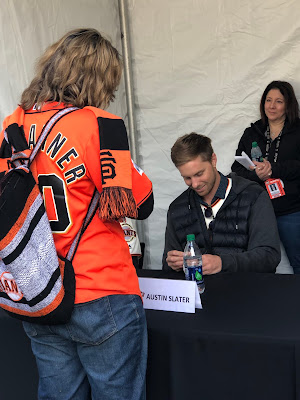 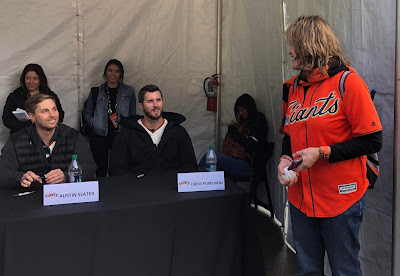 Kickin' it a little with Austin Slater and Drew Pomeranz 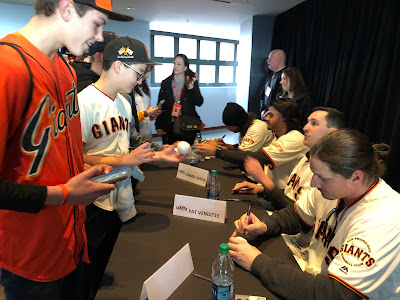 The boys stop by the "kids only" autograph station

We got there with plenty of time, and made a beeline for the top of the Willie Mays ramp.  The adults
went here to wait for Ty Blach, Tyler Beede, and Austin Slater, but due to the 50 minute rule wound up meeting Shawon Dunston, Pat Venditte (who just beamed over from the kids section) and Drew Ferguson.  The 15 year olds ran off with another adult where they met Brandon Crawford, Aramis Garcia, Pat Venditte, and Jeff Samardzija.  One of the guys that came with us had the Brandon Crawford jersey he was wearing signed.  Now that's pretty cool. Then the boys found their way back to us and sneaked into line with us and got the signatures we were waiting for.
The kids line became very crowded as the day went on.  I believe largely because it was indoors.  One of our party decided on the strategy of just getting back in the kids line over and over throughout the day, betting on the 50 minute rotation rule.
Eventually we made our way across the stadium to the Alaska Airlines Loft.  By now it was raining steadily, making part of the wait time rather uncomfortable.  We did wait a fair amount of time in this line.  Our scouts told us that Mike Krukow, Amy G., and Dave Fleming were in the loft but by the time we got there it was Mark Melancon ( "you were supposed to save the games, not destroy them!"), pitching coach Curt Young and hitting coach Bam Bam Muellens.  Yeah, missing out on the first three was a bummer, oh well.
After visiting the press box we had time to stand in one more line. The adults headed back to the top of the Willie Mays ramp to meet with Aramis Garcia, Austin Slater and Drew Pomeranz, the kids went back to the kids line, which we heard was closed since 1:30pm, and pulled off the biggest VIP coup of the day.  The line was closed but they just hung out at the back and sad faced their ways into being allowed into the end of the line.  Who was signing autographs? Serious, BUSTER POSEY, THE BUSTER POSEY.  Buster, 2012 NL MVP, 2012 NL batting champion, 2012 Comeback Player of the Year, 6 time All Star catcher, 3 time World Series Champion, Golden Glover, Silver Slugger 2010 Rookie of the Year, Posey.
The autograph was plenty to be envious of.  I told my son to send me a picture and he sends me this. 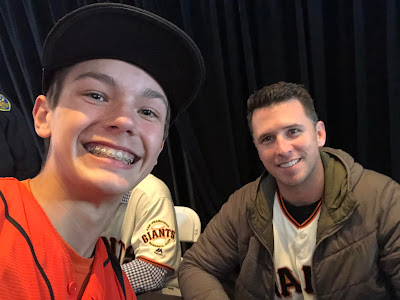 I texted this to my daughter in San Diego and she could only respond with one word...."AHHHH!!"

I asked one of the boys what he said when he met Buster.  He said he just blathered like a dumbstruck idiot.

After that, there was nothing to top it.  We took the boys to Amici's for some fabulous pizza and drove home.

What an amazing day.  Now for some pictures! 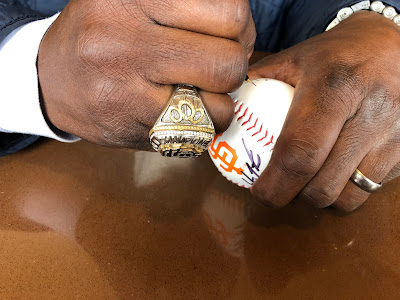 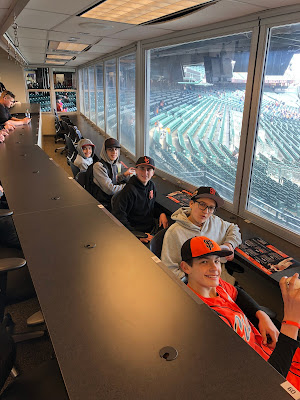 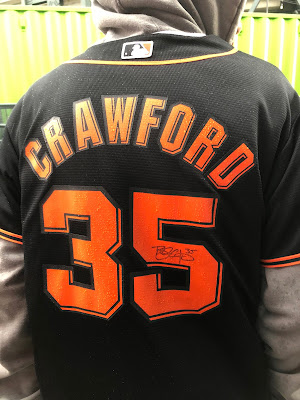 Now officially the coolest jersey ever!

Thank you for reading this post!  I just got back from the winter wonderland of Sun Vallley, ID.  Hoping to get to post about that mighty soon!