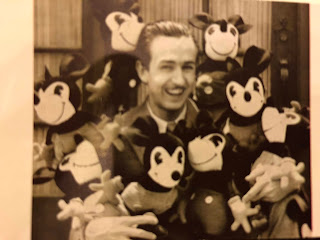 A little over two years ago I won four adult admissions to the Walt Disney Family Museum at a charity event silent auction.  The tickets had no expiration date and I thought this would be a great experience for our Disneyphile family.  The trick was that our Disney loving family actually has five members.  Saturdays and Sundays are full of sports and church activities and Mondays (the day I don't work) during the school vacation quickly filled with day camp and summer jobs, so we found it very hard to actually use our prize!  The window finally opened on a Monday my two remaining highschoolers had a day off school and my husband had off for Columbus Day.  Though we probably should have used the day to look at a college for my junior, off to the city we went.

First of all I must say that the setting is absolutely lovely. The address is 104 Montgomery Street, right in the middle of the Presidio.  The museum is set right there facing a gorgeous lawn area.  The "back" of the museum, an exhibition hall that houses rotating exhibits, faces the Golden Gate Bridge and the San Francisco Bay.  On this particular day, the water was full of boats and the sky was clear, just gorgeous. 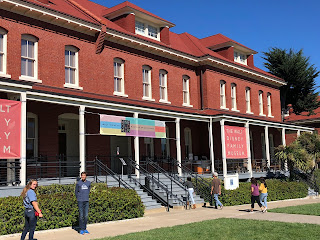 The adult admission is 30$.  The youth ticket (6-17 year of age) is half that and students and seniors receive a small discount.  This includes general admission to the museum plus admission to the rotating exhibit housed in the Diane Disney Miller Exhibition Hall, a few short steps away.  The price is 5$ less is you chose to leave out the rotating exhibit, however, the exhibit, at least in our case is worthwhile, and worth the extra few dollars

The museum is not about Disneyland.  It is purely about the history of Walt Disney, his personal life and his empire.  Disneyland opened in 1955 and a heck of a lot happened before then. The museum chronicles in meticulously labeled pictures and documents Walt's humble beginnings on a farm in Illinois, his time spent in the war, and his move to Hollywood.  Then it was onto the development of his first drawn character, Oswald, which, though swindled from him in a bad business deal, became the inspiration for Mickey Mouse.

Walt used animators to start stringing pictures together to create short films featuring his characters.  It was amazing to see how in the complete absense of technology, the short films worked and were successful.  Short films added sound and then color.  In 1932 Disney won his first academy award for Best Short Film (Cartoon) for his creation, Flowers and Trees.

Not long after, Disney embarked upon his greatest adventure yet, the full length motion picture Snow White and the Seven Dwarfs.  He got plenty of pushback from those who said no one would go to the theater to watch a 90 minute cartoon.  The film was released to the public in 1938, and was a critical success, and to this day, adjusted for inflation, is among the top ten North American performers.  Though Snow White did not receive an Academy award in 1939, Walt Disney received a special award for screen innovation that year, especially fun as it was presented as one large statue and seven mini statues.

The room describing the animation of Snow White is again amazing, particularly the development of the dwarfs and their individual characters.  Animators watched live figures to see how Snow White's skirt might flow when dancing, or how a squirrel might run across a room.  My favorite is the way they watched a fat man dance to simulate how Happy's tummy might bounce while dancing a spirited jig.
.
After the success of Snow White, it was off to the races for Walt Disney.  Along came Dumbo, Sleeping Beauty, Cinderella, Bambi, Peter Pan, and Alice in Wonderland.  He started to make live action movies without animation like 20,000 Leagues Under the Sea and Old Yeller.  Then came the movies that combined animation and live action, like Song of the South and of course, Mary Poppins.
One particularly cool document is Walt's typed letter to Julie Andrews asking her to consider the part of Mary Poppins. 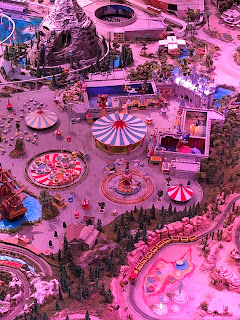 The upstairs winds down to an Walt's full scale imagining of Disneyland as it was to look on opening day. This a sight to behold and it's fun to see how many rides you can recognize and see their change in location from 1955.  From here we get to see technology from a lot of the original rides (animatronics were a Disney invention), the evolution of tickets, and thoughts for the future.  We also see the evolution of The Mickey Mouse Club, the Sunday night classic The Wonderful World of Disney and all the live action classics, Bedknobs and Broomsticks, the Parent Trap, Freaky Friday, Herbie the Love Bug...  How many can you name???

Walt Disney passed away after a short and sudden illness in late 1966 at the age of 65 .  The last room is poignantly dedicated to how the world mourned.

Though we all know that the Disney legacy goes far beyond the date of Walt Disney's death, I find it quite suitable that the museum, which makes itself a celebration of the life of the king rather than his kingdom, closes its story in this way.

The Main Building also houses a movie theater which plays changing Disney films, some that are quite obscure.  While we were there, I believe it was the 1949 movie The Adventures of Ichabod and Mr. Toad,  that was playing.  Currently, it is Fun and Fancy Free and Make Mine Music, among others featured this month.  The film screenings are an extra charge of 10$ for an adult and 8$ for a youth 6-17.

The Main Building also has a cafe and a pretty good gift shop that I would almost classify as a bookstore. 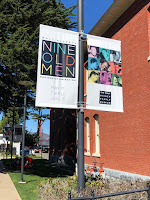 Returning to my previous mention of the Diane Disney Miller Exhibition Hall, the current featured exhibit (which will run through January 7) is titled Walt Disney's Nine Old Men: Masters of Animation.  The exhibit is a collection of sketches, concept art, first drafts of each of Walt's main animators.  Each enclave is dedicated to one animator.  Animators were responsible for the development of certain characters and the exhibit shows how a lot of these characters evolved.

Anyway, I think I have gushed about this museum enough.  It is delightfully done and well worth the time and the money.  I highly recommend it to all Disney enthusiast!

And now for some pictures!  I clearly did not take all of these but found them on the internet. 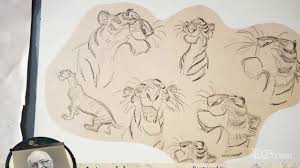 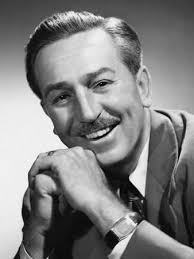