Another drought year had fallen upon the state of California, and again my GoFamily packed up our minivan and made the 9 hour drive to "fairer snows," the city of Bend and Mount Bachelor Ski Area.

The drive to Bend is not an easy one.  We left our home in San Jose at precisely 536 AM and pulled into Bend at about 245 PM.  Though the drive takes you by majestic mountains and thorough forested lands, most of the points of interest are a variety of rest areas, all of which look exactly the same, and forlorn boarded up small towns..so an interesting collection of movies, books and other occupations is a must.  Also the last portion of the drive is two lanes and is shared with 18 wheelers coming at you from the opposite direction, so driving that portion in the daylight is the best choice.

So what's new this year in Bend and on Mount Bachelor?

Last year we skied 2 out of 3 days in a mind numbing snowstorm.  This year we skied 3 days from 9 until the lifts stopped in glorious sunny weather.  It was hard to imagine this was the same resort.. trees were bare, chairlifts were dry, and even more unrecognizable, was me skiing in sunglasses, no hat and glove liners, with one thin fleece layer under my jacket.  That was Wednesday when the temperature on the mountain reached 55 degrees.  The other days were slightly cooler, but not even close to the 6 layer, double socked, double gloved, frigid days of my Bend past.

There is definitely a pervasive attitude amongst Bend locals that there is not enough snow, and this may be true.  There are a few rocks and twigs starting to show through, a few areas are closed due to poor snow coverage, and there are ungroomed areas that are more like ice rinks than ski slopes.  It's not Bachelor at its finest, but all chairs were open and the mountain was skiable at all levels from top to bottom..., and this I can tell you...IT'S BETTER THAN ANYTHING THERE IS IN CALIFORNIA RIGHT NOW!! 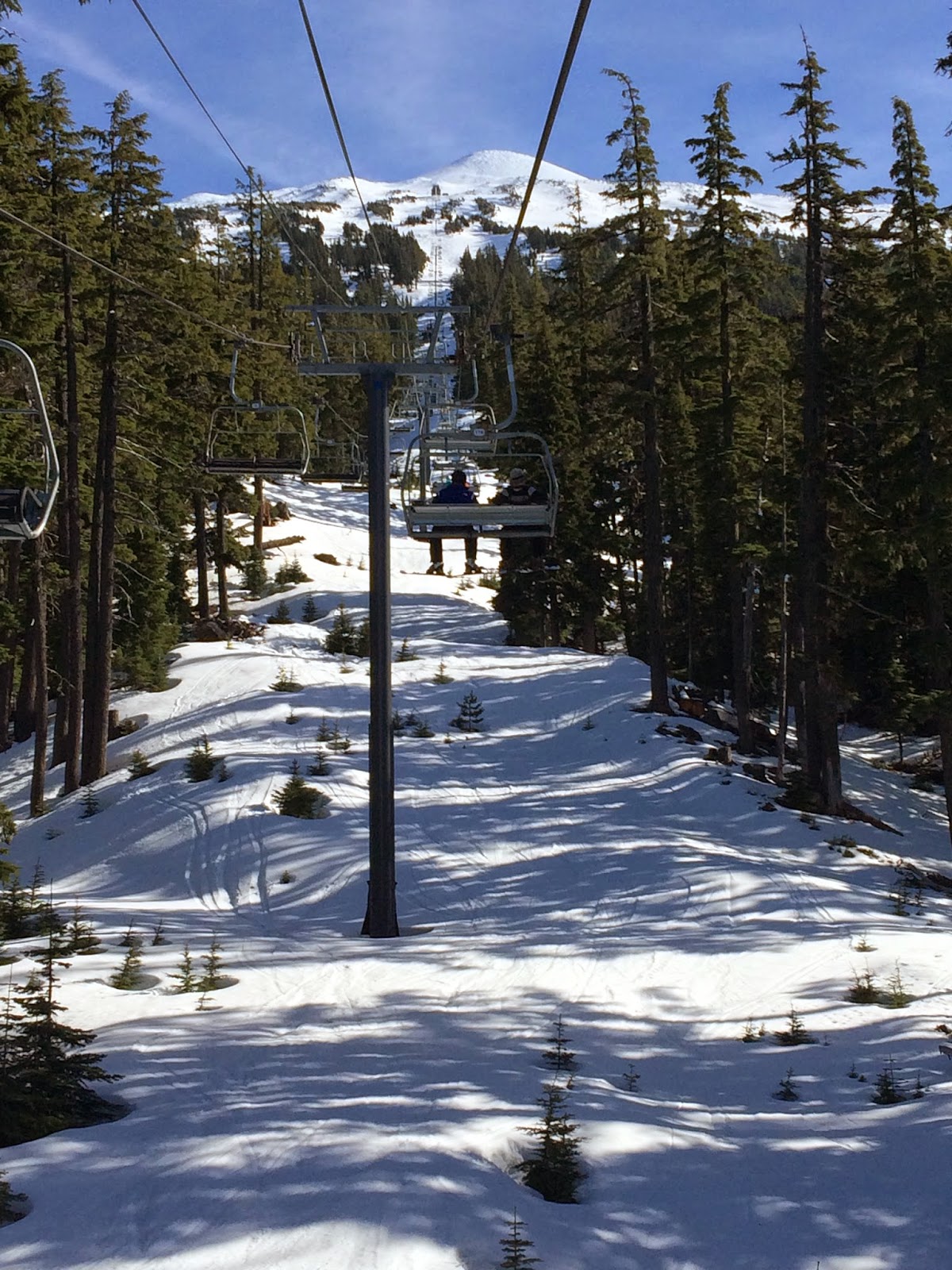 Look at the difference!  It's hard to believe this is the
same mountain as that shown in this picture, taken last year. 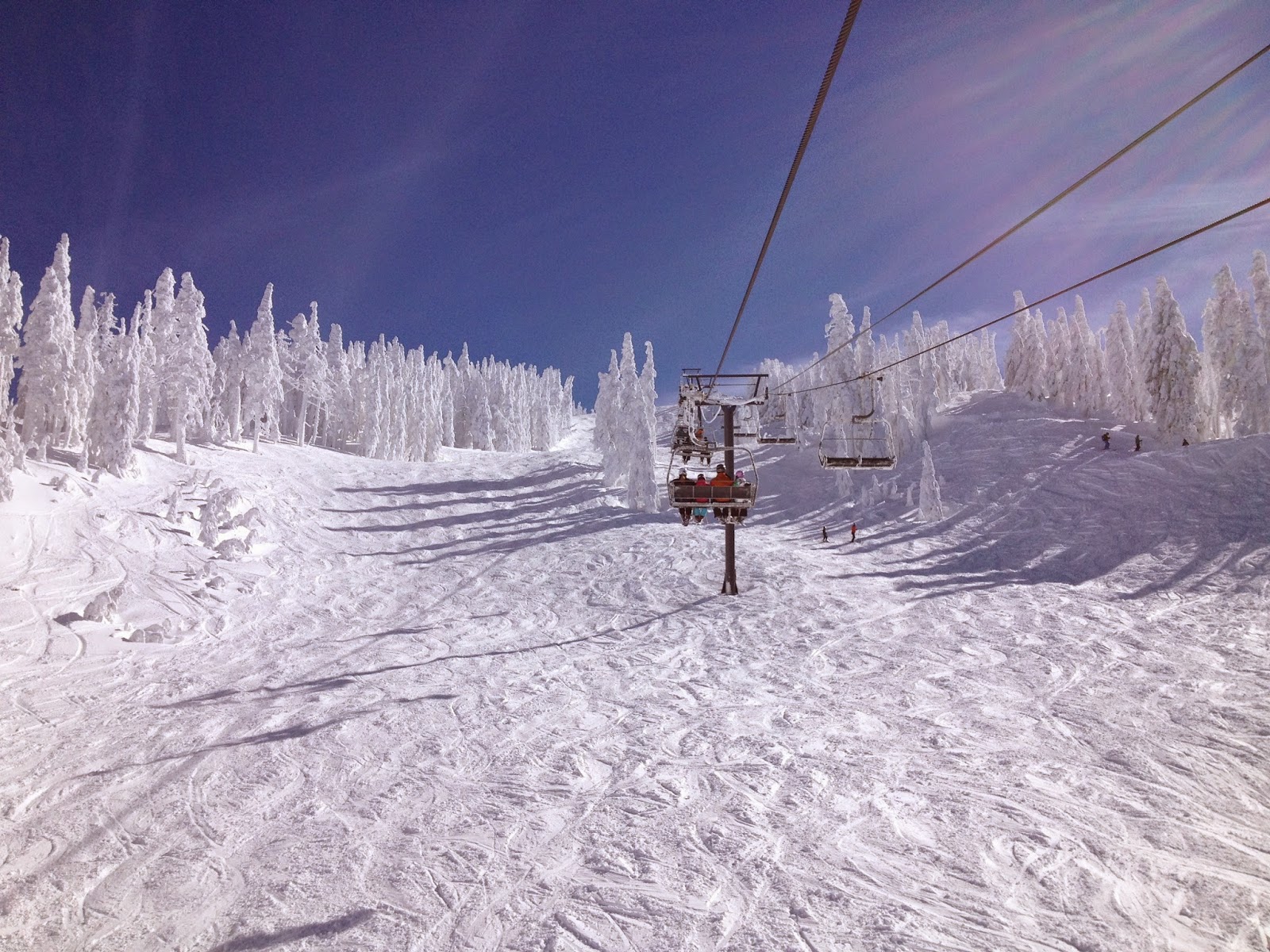 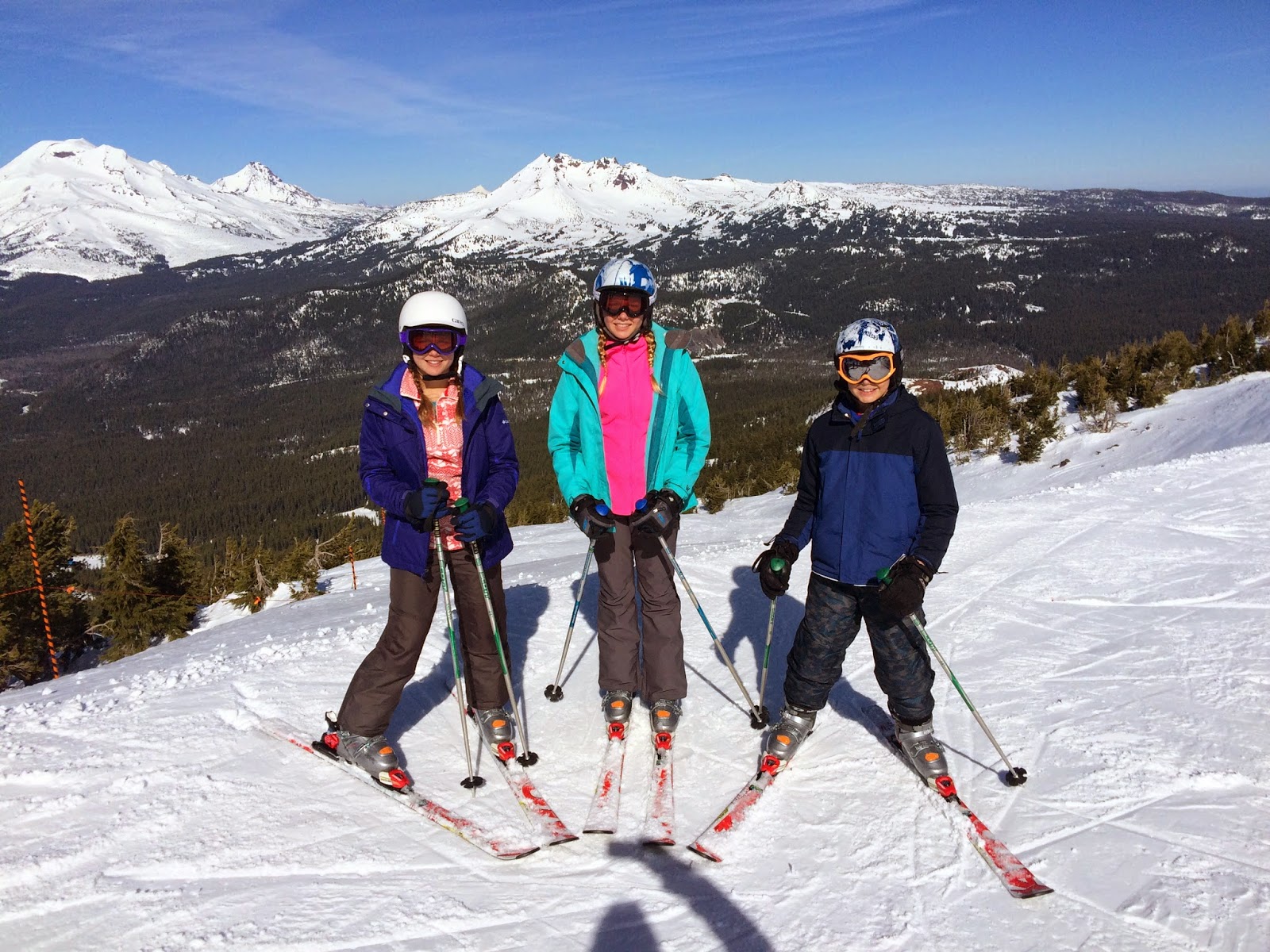 Look at the open jackets and the absences of scarves.
Last year we were cold! 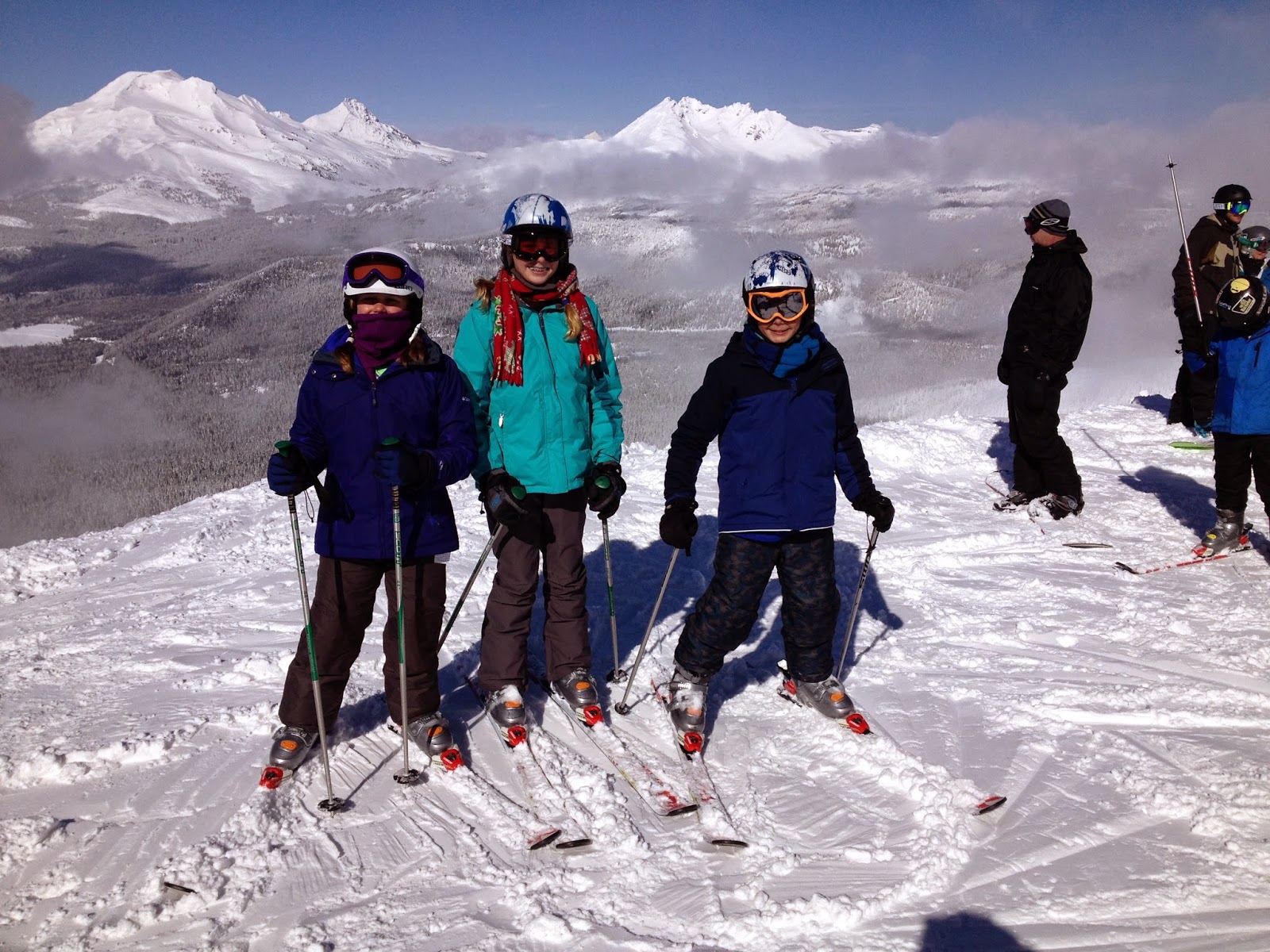 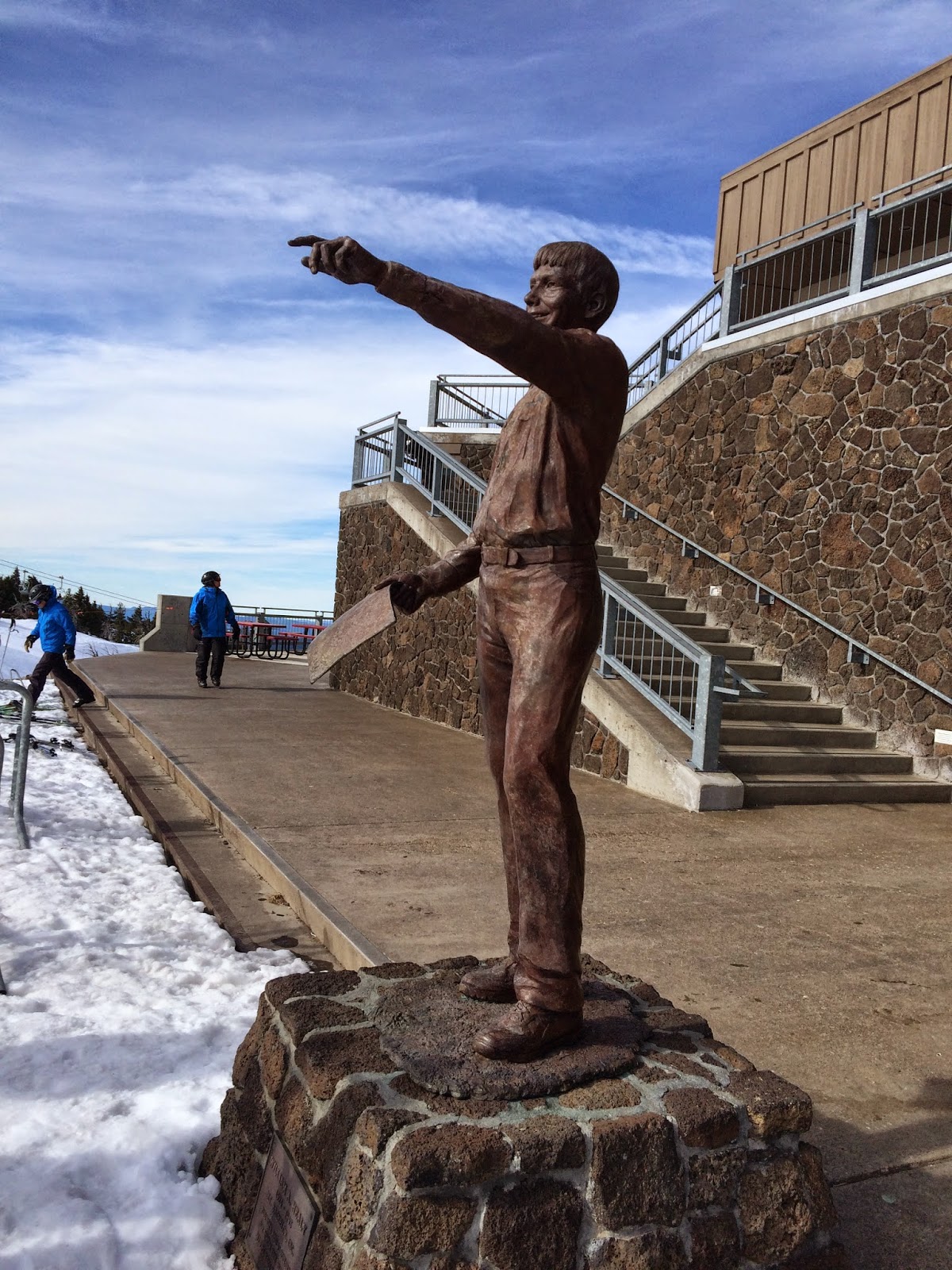 This one's funny!  This year I got to see the name
of this guy.  Healy?
By now I have forgotten... 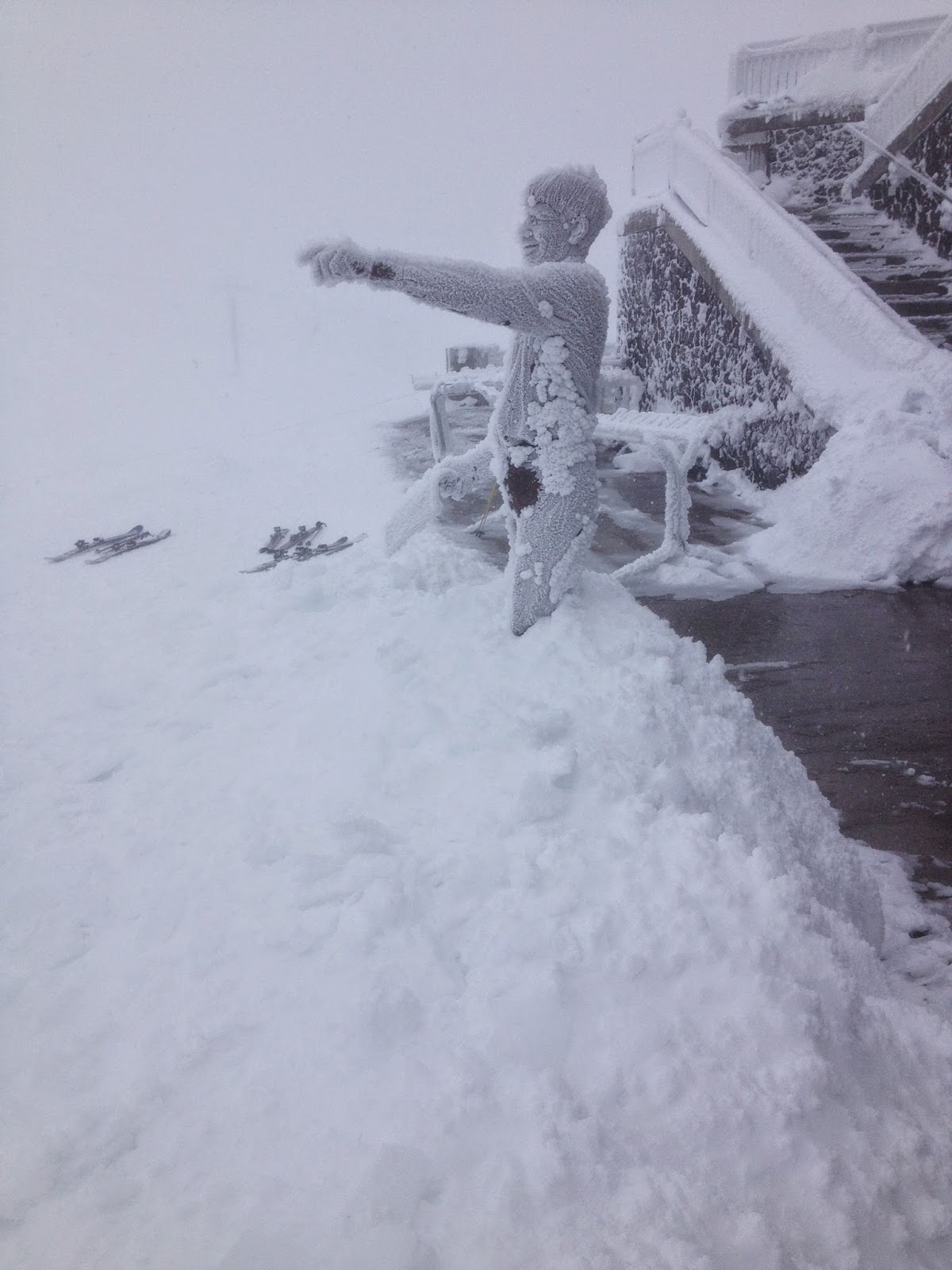 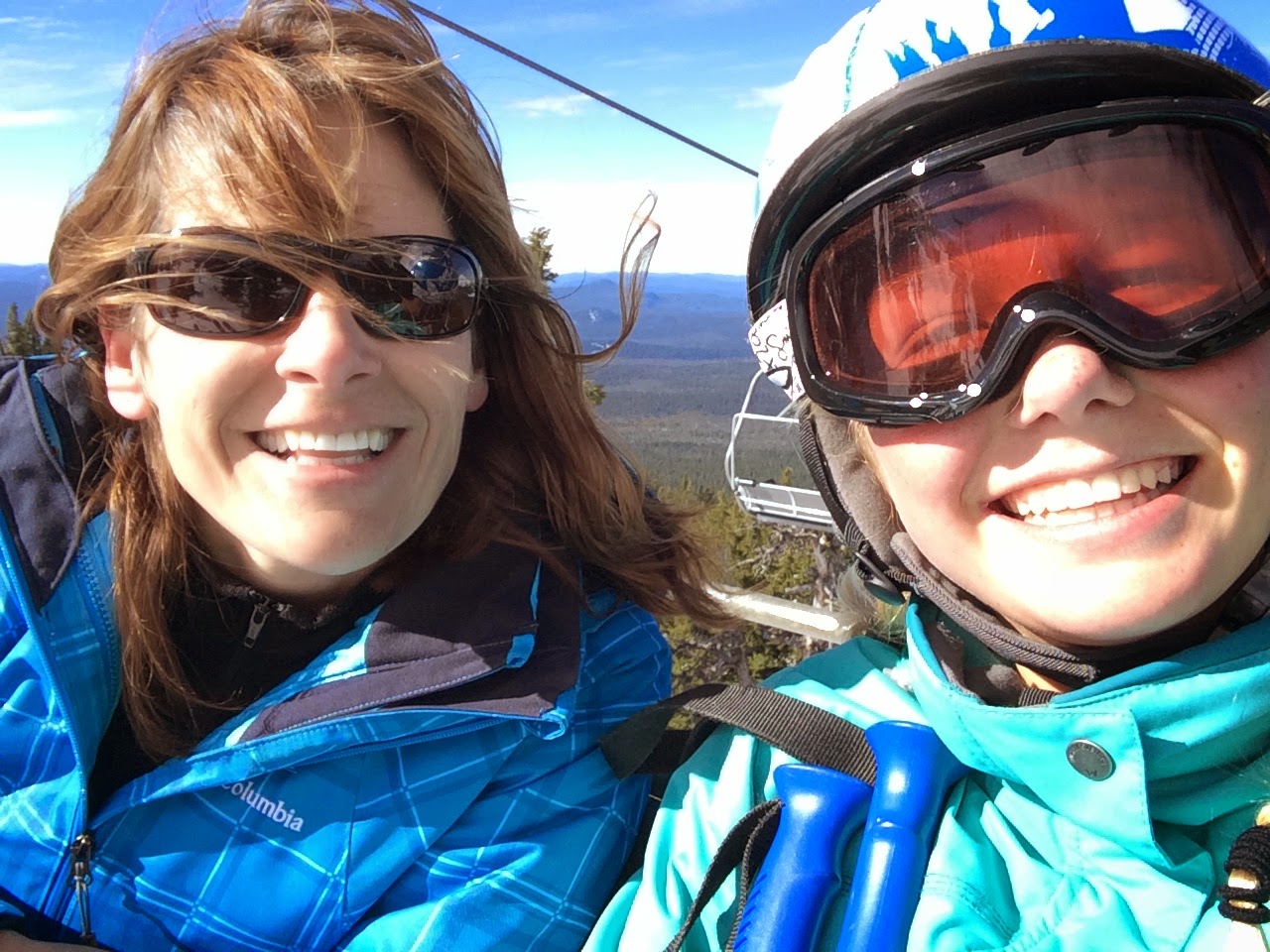 Just look at what I'm wearing, or not wearing!
Sunglasses, no hat, no headband!
And last year I was not smiling!

Yes, that's new, because last year I was one year younger..

I think I ski pretty well for a 47 year old.  Most women my age sit in the lodge and read or knit, though some do cautiously putz down the blues in carefully coordinated outfits, taking multiples breaks for finger and toe warming.

I ski like a reckless maniac.  The lifts open at 9 and that's when skiing starts, and it doesn't end until the lift operator tells you you can't get back on.  No stopping. No breaks, except for the bathroom, and you better make that quick!  Ski.  Ski aggressively and ski fast.  Take the hard way.  Get down to the bottom and go back up and do it again.  Mount Bachelor has a very cool program, called Track Your Turns,  which allows you to track how many vertical feet and how many runs you take in one day.  On average over three days, I rode took 21 runs and skied 33,283 vertical feet daily, actually increasing over the three days.  I guess I just don't tire that easily.

It is only by the grace of God that a day of skiing has not landed me on an operating table, as a crash at these speeds onto icy slopes, a caught edge while racing my children back to the lift, at my age could prove quite damaging.  I fear my day is coming, my day of leaving a 100 yard trail of strewn equipment, apparel, broken bones and torn ligaments.

I do wonder how long I can keep this up.  This time I do avoid the stretcher, but my body has left me with some reminders.  After the first day I woke every time I rolled over in bed as everything hurt.  At 3 AM I reached for my friend Relafen and took 2 more ibuprofen in the morning.  After skiing I depend on the hot tub and a Hi-ball to loosen my poor stiff joints.  The second day I was unbalanced and wound up sitting on a flat area.  I had no strength to rise from this position, either with arms or legs, so I clicked out of my skis to roll over and come to a sit.  If I hadn't, I would have later been rescued by the ski patrol, a new version of 'I've fallen and I can't get up.'  The 3rd day I tweaked  my knee early in the morning, a painful twist which I ignored.  Today my left knee is twice as big as my right, but I'll ignore that too.

Something just wasn't right with Nicholas.  The first day he started out slow and hesitant..pizza feeting down the entire slope and wholly afraid to build up any type of speed which might render him unsteady and cause him to fall.  Any time we got to a stretch a little more inclined than most he halted to a crawl, leaned his weight over the backs of his skis and made painful slow turns, causing all the rest of us to wait and stop, a lot. (See above my attitude toward these types of delays.)  Finally we went to the top of the Northwest Express chair where we attempted to find the easiest groomed way down.  Nicholas peered over the crest of black run Snapshot and completely froze.  While poor Craig stood and watched him well, not move, the girls and I lost patience and took off, hoping to catch up with them on the next run down but then losing them altogether.

"That's it!"  I told that slow poke pie slice, "tomorrow you are going to ski school!"  At first he was not all too happy, but it did not take him too long to concede.

We got him there bright and early to enroll him in a 2 hour lesson beginning at 10 am.  I had toyed with the preference of having him in a private lesson, but that toying ended abruptly when I found out a private lesson was over $200.  A group lesson, which I gathered could be comprised of a wide variety of ages, was $85, and was not to be a group of more than 7 kids.  So off to the meeting spot we went at 10 am.

What's nice about the way Mt Bachelor does lessons is that they come to each kid and assess their abilities and then place them in a group accordingly.  There is no placement by age or by what your parents think you should do.  Each day is different depending on who is there.

Nicholas was placed in a level 3 group which was designated for kids starting to learn to make parallel turns.  He seemed a little old for this group, as there were kids that were clearly 6 to 8 years old, but that's where we left him.  It also looked like this group was going to be at its capacity of 7 skiers.

We saw Nicholas during his lesson and he was happy as a clam.  The group had split into two, leaving only the three older kids in Nicky's group.  Instructor Parker worked some magic and suddenly our boy was "keeping up with the instructor" and "ready for level 4 or even 5" if we were to put him in a lesson again.  The rest of the week he kept up with the rest of the family.  There were no more complaints about runs being too hard. He parallel turned just like his sisters and raced his mom down to the lift.  Who is this boy and what have you done with my son??  The lesson was the best $85 we ever spent!  Well almost...  Better yet, during the lesson, the remaining four of us zipped up and down the back side, putting oodles of vertical feet on our turn trackers and riding the quad chairs altogether!

Worth it?  Well, we're not so sure.  There is no doubt that it is colder up there, sometimes 10 degrees colder than at mid-mountain, so the clothes you were happy in before may prove to be not quite sufficient up there, especially as you ride the lift, which is also susceptible to wind (that's why they close it in bad weather!) There are a combination of intermediate and advanced runs up there.  While Beverly Hills is a nice groomed run, the rest was icy like with ice CUBES on the run.  It was unpleasant to ski on and unpleasant to ride the lift.  In fact, I had flashbacks to the pain and suffering of last year.  We rode it twice, once on each of two days, and quickly returned to the lower portions of the mountain.

5)  Back in Bend..new accomodations!  Check out the pictures!

Last year we stayed in a lovely 2 BR 2Bath condo in Mount Bachelor Village for $165 a night.  This year the same condo was available so we naturally booked the same place.  Why try to improve on what suited us just fine?

Well a few days later we got a phone call from Alpenglow Vacation Rentals letting us know that the condo was occupied by the owners and was not available for rent, BUT would we like this 2100 square foot 4 BR 2.5 Bath house in the next neighborhood over for $230 a night?  Are you kidding is what we said?  Just a quick look at the pictures and we were in.  Maybe the biggest selling point?  The hot tub was right outside the sliding glass door and not a walk away to the clubhouse.

A house like this in any Tahoe area would be $400 a night hands down.  Welcome to Oregon.

The house was positively lovely, and an improvement in our opinion over the condo.  Each child had their own bedroom.. what a luxury.  The kitchen was spacious and well stocked.  There was a washer and dryer, dishwasher, fireplace, Cable TV, playstation (which we didn't use), and a two car garage.  This house could have been shared with another family of four, but it was nice to not share it, and for all of us to have some semblance of space and privacy--especially at the price!

And now for some pictures! 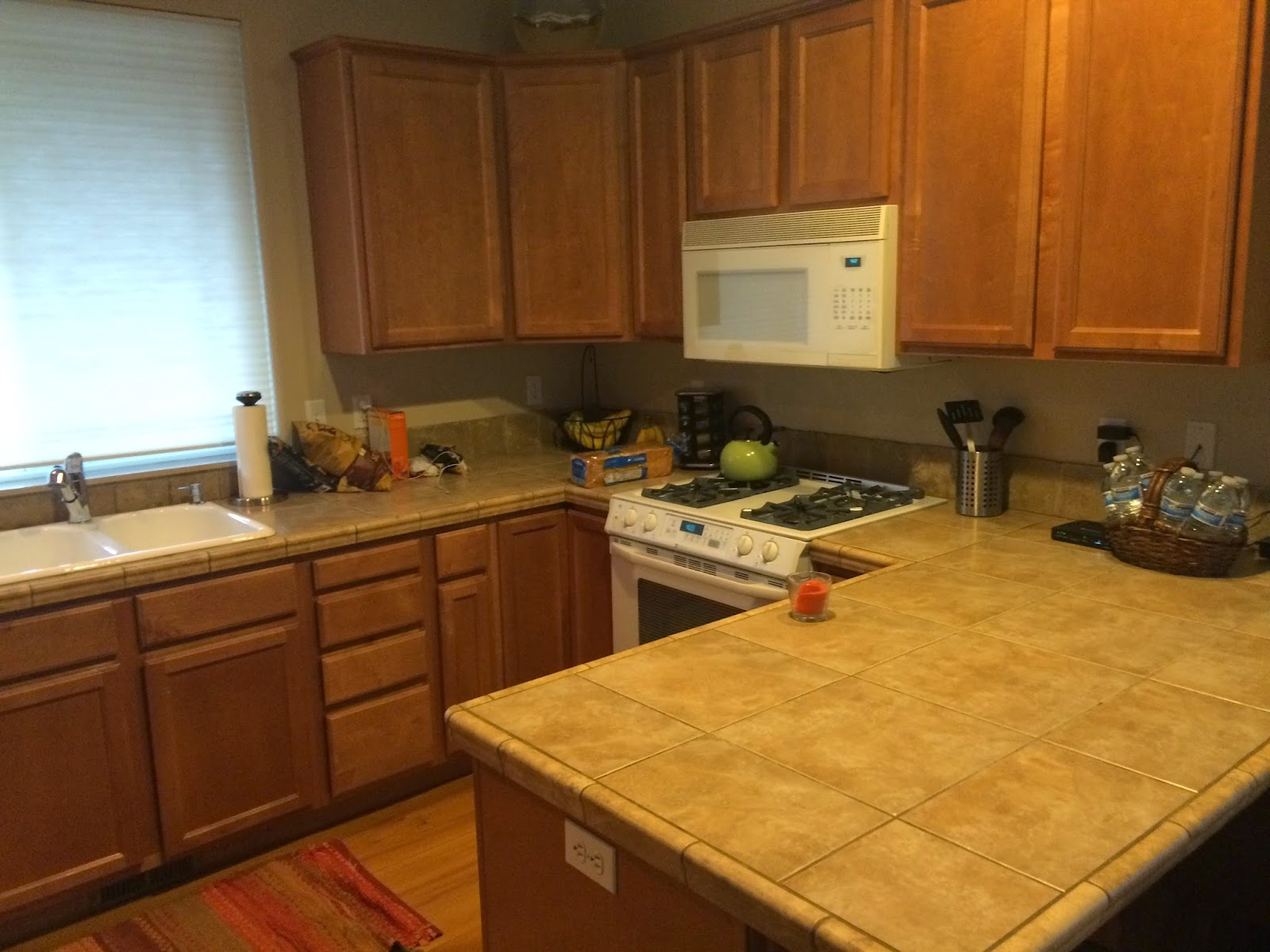 The kitchen was big enough! 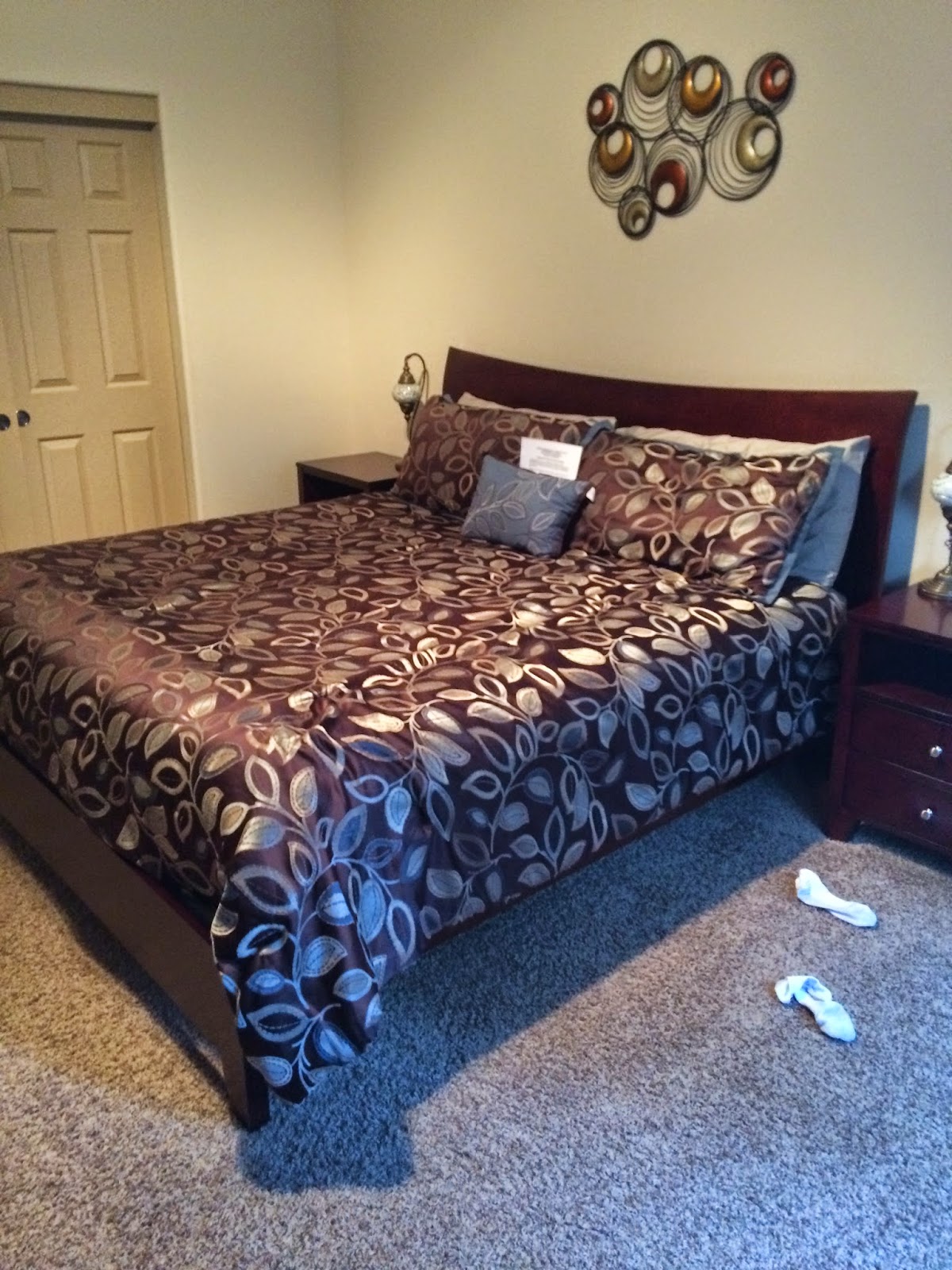 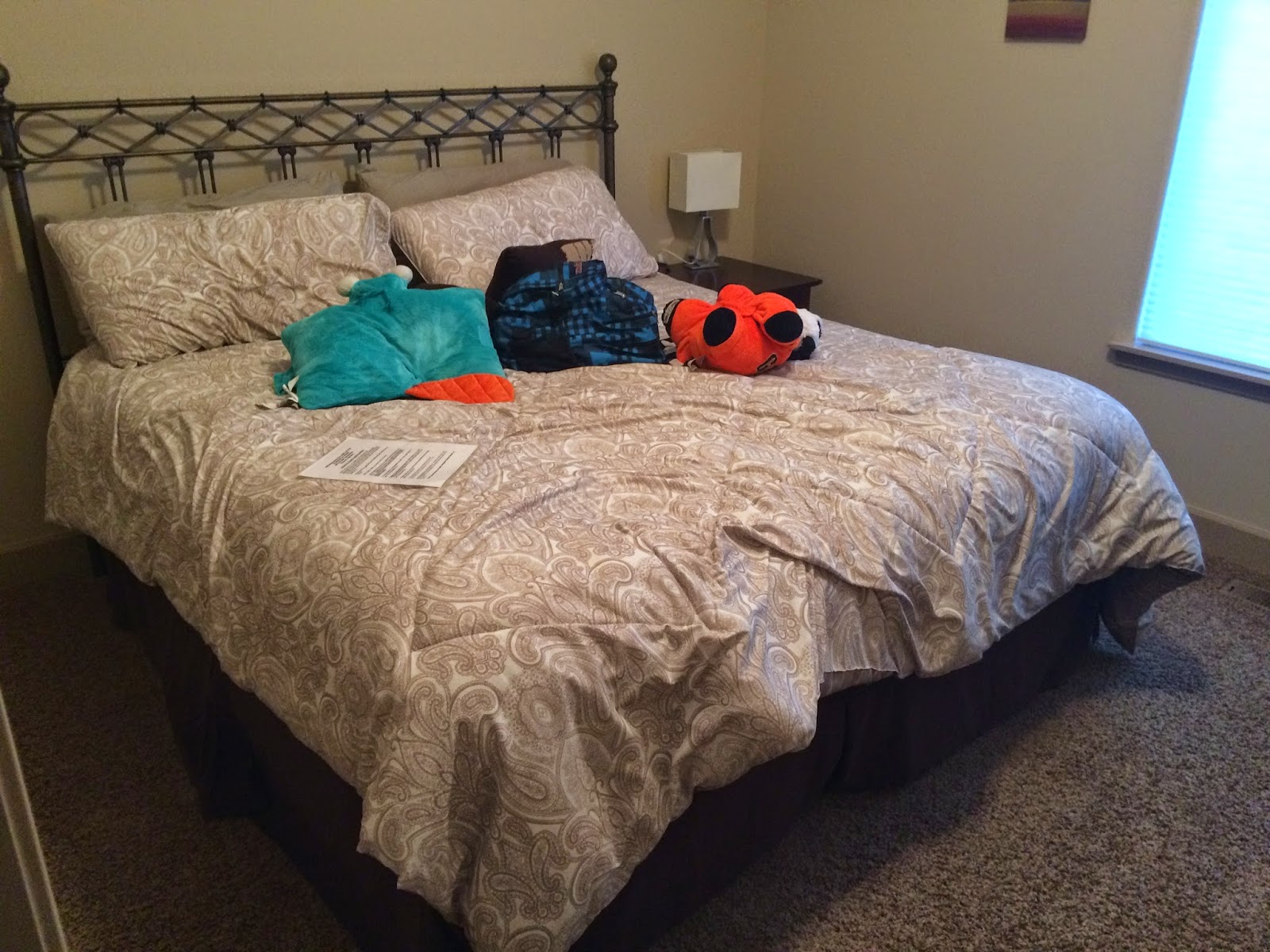 My son slept in this gorgeous fluffy bed all by himself!
﻿ 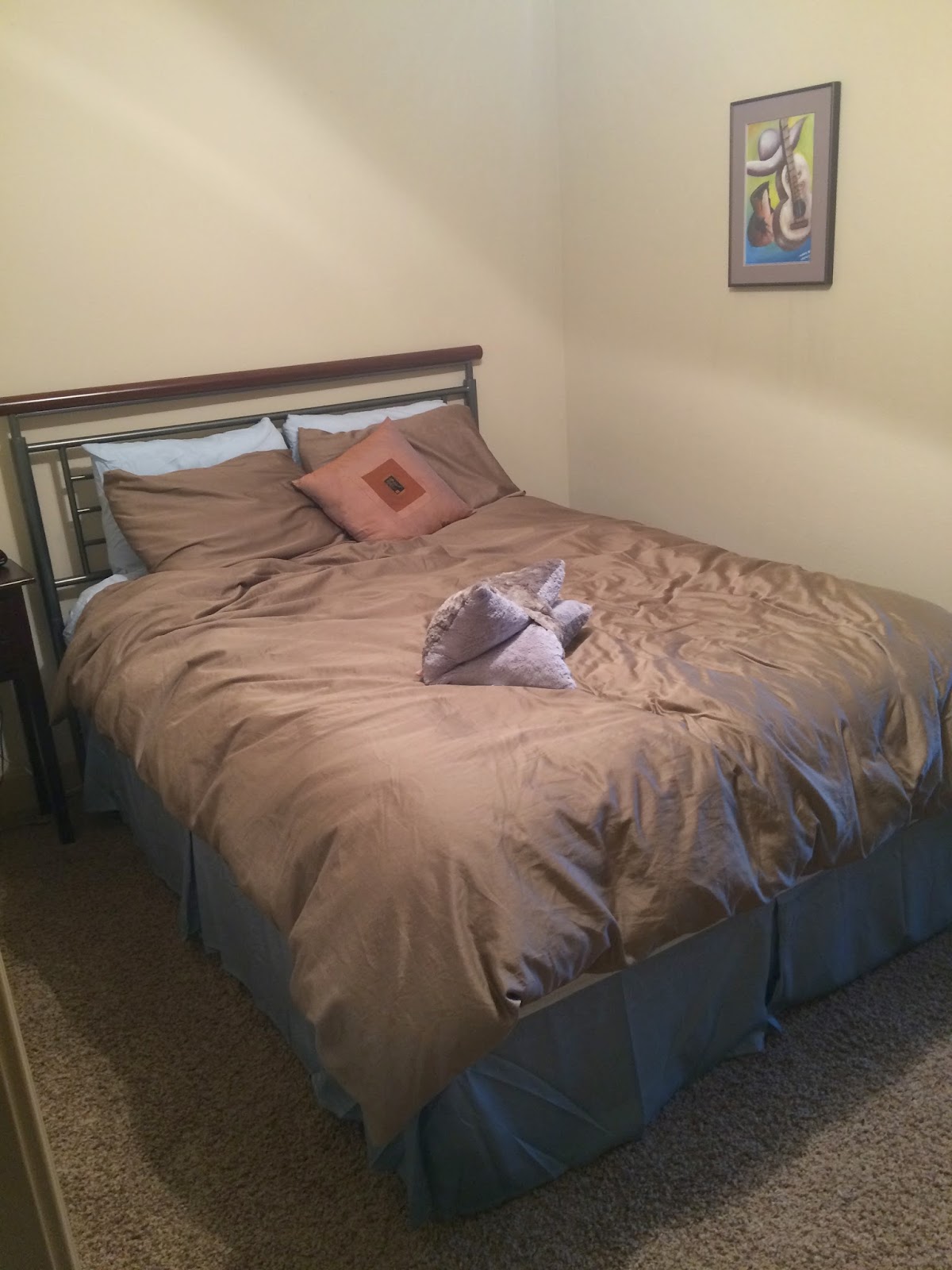 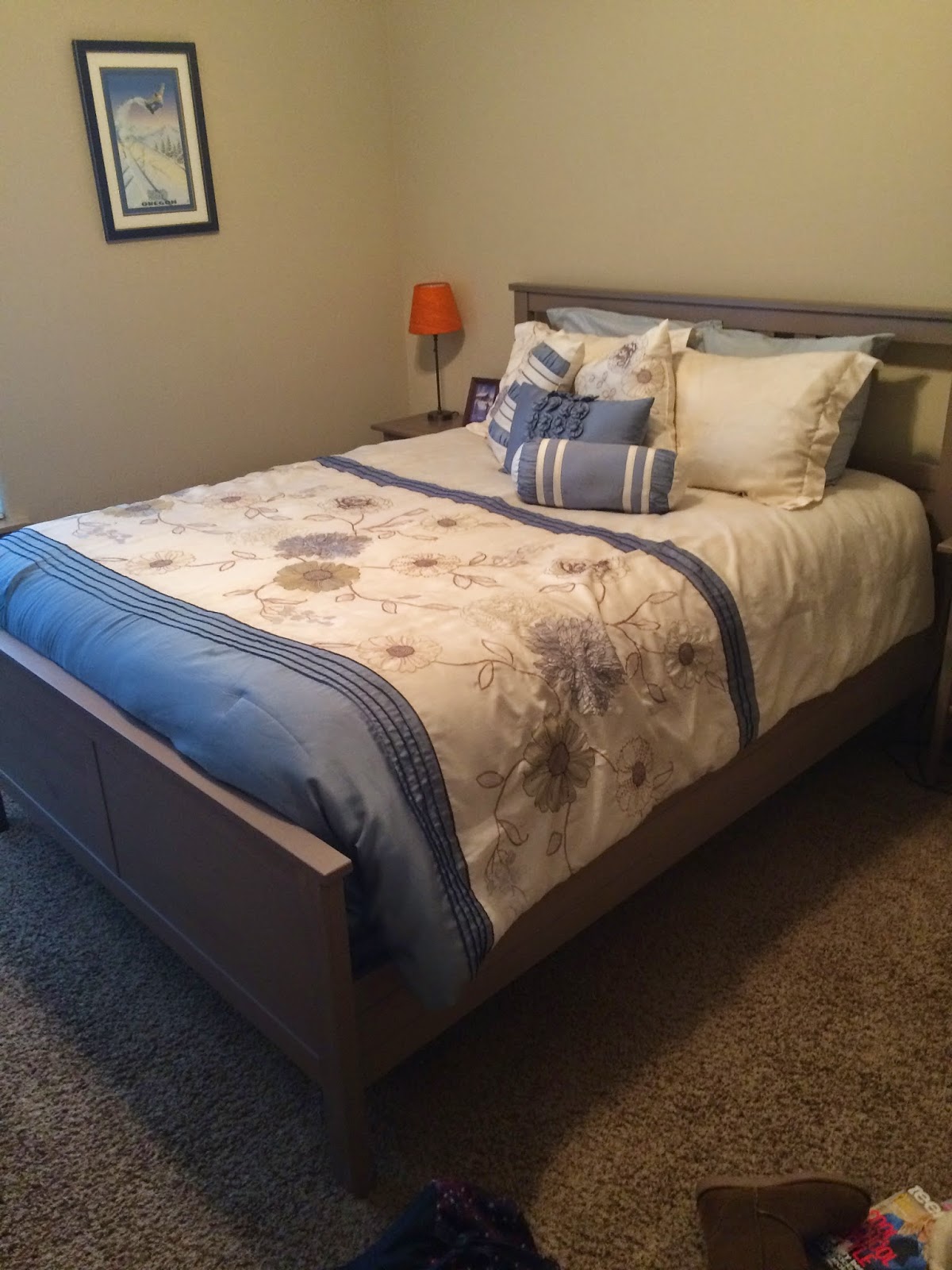 And my girls slept in these two rooms 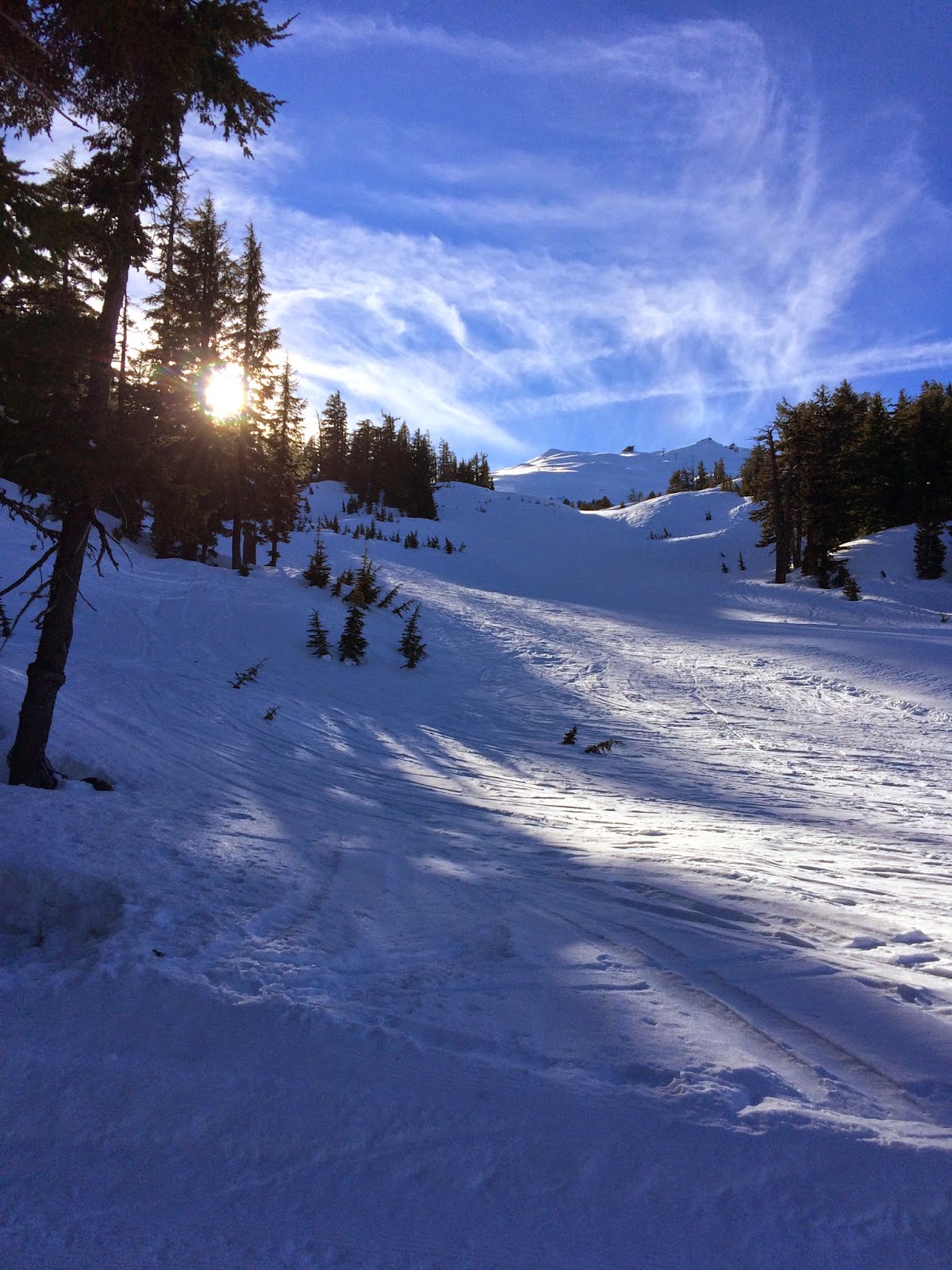 And this one is just pretty.  Happy Mt Bachelor morning!
I hope you enjoyed reading this post! Not going anywhere for a while now..so I'll have to write about something!  Who knows!﻿
Posted by Go Family Mom at 7:51 AM