The San Francisco Bay Area is home to two major league baseball teams, the Oakland A's and the San Francisco Giants.  If you grow up here, and I did, you learn quickly to affiliate with one or the other, and we were Giants fans. At the tender age of ten I listened to Hank Greenwald call game after game on KNBR and if the stars aligned correctly I might be able to catch a live broadcast on KTVU Channel 2.  These were the days when Kruk and Kuip were actually playing baseball!
Candlestick Park was about 40 minutes north of my parents home and you could get a lower level seat there for eleven dollars.  While you watched baseball you could be subjected to frigid temperatures and winds that could blow the hot chocolate right out of your Styrofoam cup.
The 2000 move to Pac Bell, now AT & T, Park was a good one, but came with a hefty price tag.  Good luck getting a good seat at all, and if you get a good seat at face value, you probably bought the whole season, or have some really nice friends.  The 11$ days are over.  Good luck getting a seat in the lower box for under $75.

But do not lose heart, baseball fans!  It is possible to watch professional baseball from a great seat in the San Francisco Bay Area without wondering where you'll get the money to pay the electric bill afterward.  The answer to your woes is San Jose Municipal Stadium, located just south of downtown San Jose at 588 E. Alma, 95112.

We visited San Jose Muncipal Stadium, or just SJ Muni as we like to call it, in June of 2002, when my daughter was about 2 months old, on a Sunday afternoon with free tickets offered to San Jose Water customers.  Since then we have gotten quite savvy about getting free tickets, and we wind up going up to 8 to 10 times during the season, which runs from mid April to the end of August, a little later if the team makes the playoffs, which happens more often than not.

The San Jose Giants are the single A minor league affiliate of the San Francisco Giants, which means that many future major leaguers will spend some time playing here before they move up to bigger and better things.  We have seen plenty of SF Giants here before they flew the minor league coop:  Buster Posey, Hector Sanchez, Brandon Crawford, Ehire Adrianza and Pablo Sandoval (he was a catcher then!).  SJ Muni was also the temporary home of Sergio Romo, Brandon Belt, Madison Bumgarner, Matt Cain and Tim Lincecum.  Some of these players show up for Homecoming and sit in the bleachers with the fans!
Also fun is that current major leaguers on the disabled list will play a few games here as part of their rehab.  They will pop in and play an inning or two and then sit the rest out, but it's still fun.  We saw Jeremy Affeldt this year, and in the past have seen Pat Burrell, Aubrey Huff (both now retired!) and Santiago Casilla, whose brother Jose actually plays for the SJ Giants!

You can go to sjgiants.com and buy a ticket from the website.  A general admission ticket will run you $11 (funny, wasn't that the price of the ticket at Candlestick 30 years ago?), youth/military $7, upper reserved and box seats for $13 and $16 respectively.  They'll mail you the tickets or you can pick them up at will call. You can also walk up to the ticket window just minutes before the game and purchase a seat.  But truthfully, this is really the dummy way of doing it.
Over these 12 years or so, we have probably attended 50 San Jose Giants games and we have paid
full price for tickets exactly four times; on opening day twice and twice when we had Little League parties at the ballpark and the kids actually ran out on the field with the players.  The California League All star game was held here last year and I guess we paid for tickets then too, but that wasn't really an in season game.
On any given day you can walk into a local Orchard Supply Hardware or Trader Joes and they will have free general admission tickets for an upcoming game at the register. There is no limit on how many you can take.  We get most of our tickets this way.
We have also purchased "Bonus Books" this year and last through Got Daily Deals which brought the ticket prices down to about 4$ a piece.  It is also common to find BOGO deals in Valu-Pak mailers.
The bottom line is:  The seats are way cheaper that AT&T, but, if you are savvy,  you really almost never have to pay to get in.  What a deal!
Oh, and if you're worried that general admission isn't a good enough seat, fear not!  EVERY seat at Muni is good, and if you can get there by the time the National Anthem is sung, you can get a great seat! 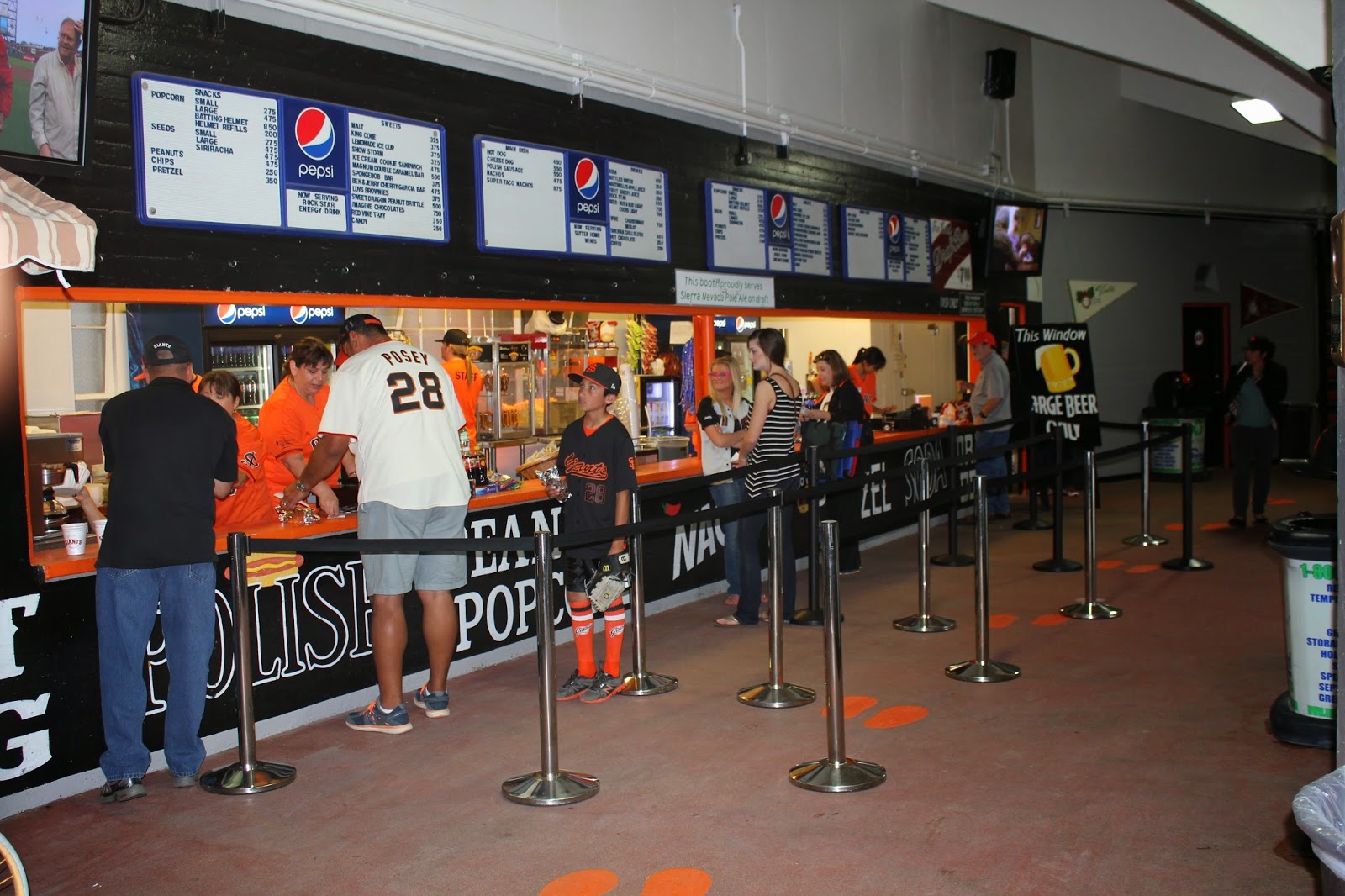 Yeah, the baseball part is fun, but I must admit to getting plenty of enjoyment from eating while at
the games I attend.  The usual baseball fare is offered--hot dogs, kettle corn, nachos, and of course beer--right in the stadium breezeway.  Just outside the breezeway you can get ice cream, pizza, garlic fries, chicken wings and frickles (essentially French fried pickles).
We like to opt however for Turkey Mike's BBQ, just a few steps from the field.  Turkey Mike's offers yummy's like tri tip, pulled pork or three pepper chicken sandwiches, several sausages including my favorite, "The Heater,"  a hot link sausage topped with pulled pork and jalapenos (get the firehose!), and burgers, as well as sides and dinner salads.
﻿﻿﻿﻿﻿﻿﻿﻿﻿﻿﻿﻿﻿﻿
There is a wide variety of beer to choose from, both on tap and in bottles.  Prices aren't significantly better than what you might see at any major league ballpark, unless you are helped out by the infamous "Beer Batter."  Each home game some poor sap from the other team is chosen to be that night's beer batter.  If said poor sap strikes out, beer is half-priced for 15 minutes!  What a deal!  You just can't NOT buy beer when it's that cheap!  You gotta pace yourself though--the last time we were there the beer batter struck out three times!Another comestible item that bears honorable mention is the churro.  We almost never come to Muni without downing a few of these delights.  They are hot and sugary and fresh and delicious.  The "Churro Guy" as we call him (who by the way is unmistakable in his cowboy hat, belt buckle, floral shirt and jeans,)  scales the bleachers carrying a plastic drawer and serves you right at your seat.  They are $3 a piece and he gives you a deal if you buy more. He must make a killing every night because he has to keep going back out to his truck to get more and he carries a big 'ol wad of cash.

So how much does it all cost?

Well, this is about what you can expect for your GoFamily of 5 for a night of baseball at San Jose Municipal Stadium.

This is about average for a frugal family.  Believe me, you can spend way more on bouncy houses and slides, way more beer, and way more food, and I've seen it done, but in reality you can get by for about $50, which is a steal for a night of professional baseball!  At AT & T Park, the parking alone is $30-40 and the tickets are anything but free.  In my opinion, there is no way a family of five is going to see the San Francisco Giants for anything under $350--that's pretty steep for my pocketbook!

Baseball is an All-American sport that should not only be enjoyed by the super rich!  San Jose Giants is a way the average citizen can enjoy multiple games yearly on an average budget.

Now for a gallery of photos from Municipal Stadium!


Thank you for reading this post.  I keep promising what I will write about next and then I never do it, so you'll just have to see what happens. 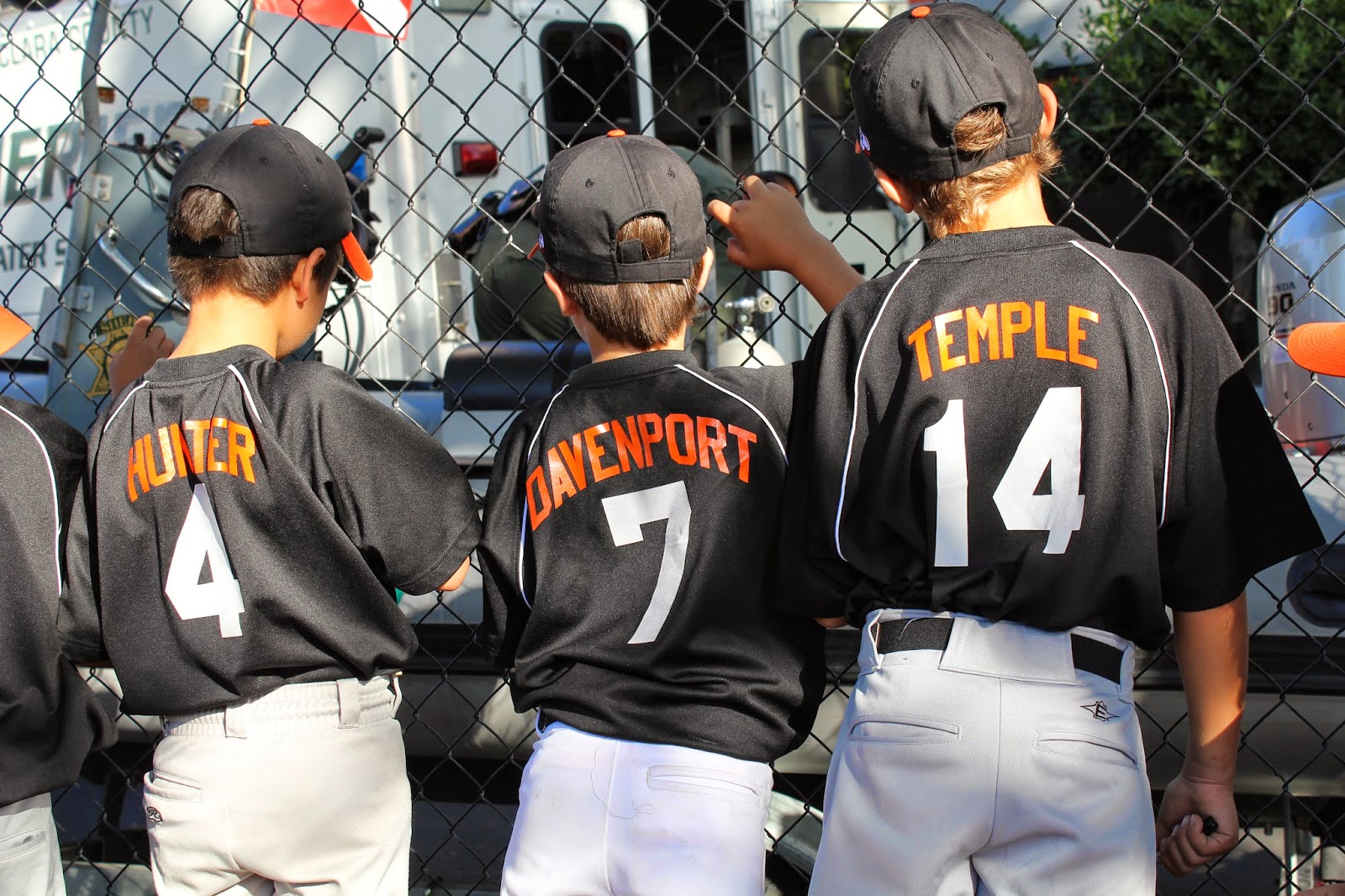