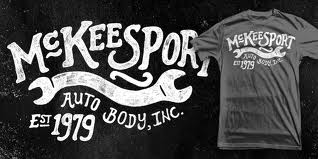 So we are still in McKeesport, PA--staying at the home of Mom T., spending time sitting around the table talking and eating cabbage rolls and home made bread and snickerdoodles and pumpkin whoopee pies, and drinking the white zinfandel and the beer that has been sitting around since my father in law's funeral.
My powerhouse mother in law moved out of her room and into the rumpus room downstairs, leaving us free reign of the entire second floor.  My son decided he was scared the first night we arrived, ousting me from my position in the queen size bed and relegating me to the top bunk in the room my husband used to share with his brother. Despite my fear of the whole business crashing down onto my 11 year old daughter in the bottom bunk, I was quite comfy and happy up there. Though my daughter tried to convince me otherwise, I left strict orders that the ceiling fan be kept off, lest I wake up in the morning with the bruises and concussion I inadvertently suffered while trying to get up to go to the bathroom.
The nights were cool and still and through the open windows were heard trains, crickets, and rain.
By the weekend my brother in law showed up and shared the second floor with us, and the walking around in our underwear had to stop.
Anyway, when we got there nothing really had been planned, so it was up to us to figure out what to do with five or so days.  We got out the Ipad and turned our attentions to a family favorite--BASEBALL.

The Pirates were out of town the entire time we were in PA, so we were going to have to look at minor league....or something.  The Washington Wild Things were in town so we decided we were going to make the 55 minute drive to the 3200-seat Consol Energy (?) Park in Washington, PA and see them play.
The Wild Things belong to the Eastern Division of the "Frontier League" (again ?), an independent baseball league not affiliated with Major League Baseball, where they occupy the prestigious position of 6th out of 7 places. Most probably will say, "why waste your money?" but we say, "because general admission is $5 and we have nothing better to do!"
The stadium is quite nice, new, and clean--and on a Wednesday morning, the choice of general 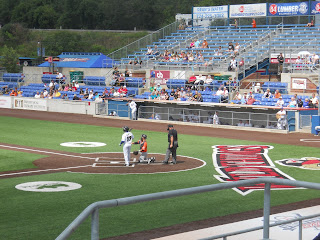 admission seat was yours. One very odd feature of this ball field is that it is completely turf, even the base path, so that when a player slides he comes up with his uniform clean and no dust in his wake.
All the food is your usual fare, and there is the obligatory gift store and wheel of fortune.  As long as there's beer, it's all good.  Who cares that it's 11 in the morning?
They had a lot of fun in between inning distractions. I wrote some of them down and then left the paper somewhere.  The scariest thing I saw was a poor girl dressed like a cow doing the Cha Cha Slide on the top of the dugout.  I think there was a cookie dancing at the same time on the other dugout.  This was the precursor to the milk and cookies they sold for a dollar somewhere midway through the game; that was a nice touch!  Anyway, my favorite gimmick was when the license plate of the dirtiest car in the parking lot was announced and someone won a car wash.
Anyway, did I mention the Wild Things won?  I can't tell you the score or the name of even one player or if anyone hit a homerun, but I do know what the mascot looks like....

About one hour out of McKeesport, in Somerset County, lies Laurel Hill State Park.  The park itself

is 3935 acres and features, at varying times of the year, outdoor recreation such as hunting, cross country skiing and snowmobiling.  My husband camped here with his family as a boy.  His family would stay for a week at a time.  The camping is the kind I like--with showers, flushing toilets, and running water.  There are 262 camping sites available and 8 cottages.
Anyway, we weren't here to camp.  Our destination was the Laurel Hill Lake--a 63 acre man made lake constructed during the Depression by the CCC.  The area is green and pretty but the lake and beach here at least on the day we came were far from impressive.  The water was very unappealing, and in fact, because of water clarity issues I guess because of recent rainfall, the day we came you weren't even allowed to swim.  Pa, August, no swimming--go figure...
You can rent a paddleboat here for $8 per hour (an exercise in frustration) and canoes are also available.  There is also a concession stand which we did not check out.
Yeah, it's not Lake Tahoe, but the beauty of this place is getting outdoors with your family and being on vacation.  While we were there Mom T. whipped out a camping stove and prepared us some sloppy joes for lunch.  After some fresh strawberries and cantaloupe came the homemade chocolate chip oatmeal cookies, and boy we were set.

Well, it's not really just the church picnic, though we did attend the church picnic while we were there.  "The Church Picnic" represents the best thing we did while in McKeesport, which was spend time with family.
My mother in law was the oldest of seven children born to Mark and Anna Gasparovic, who in turn produced 24 children over about a span of 25 years, so my husband has 21 first cousins on his mother's side (and three more on his father's side).  Four of the seven Gasparovic siblings still live in the McKeesport area, as do four of the first cousins, two of which have children of their own.  Mom T.'s cousin lives there too.  There is always someone to get together with and they do everything together--International Village, Greek Festivals, Balalaika Concerts, Music in the Park, or just Pizza Hut after church on Sunday, which they all do together as well.  Company is just a phone call away.
The family genuinely enjoys each other's company, and everyone is able to get together on a moments notice.  Thirteen of us went to dinner at Luciano's Italian restaurant on a random Wednesday night and everyone was related.  My kids re-met family members they hadn't seen in seven years, including meeting for the first time second cousins they didn't even know they had.
Twelve of us went to Pizza Hut after church on Sunday and again everyone was related! Ten of us went to Music in the Park (it's not called that there, but you get the point) and everyone was related!
Family is important and your family are your best friends.

The Church Picnic itself was held the day before we left.  Everyone is so warm and pleasant that it was almost like being with our own church family.  They grill, drink bad beer, have a bounce house (called a moonwalk in PA) for the kids, play baseball, play Bingo (which I won twice to the tune of a whole $8, which I gave back to my mother in law, since I was playing with her change bag), play baseball, folk dance (thank God not this time), and just generally sit around and visit and eat.

I counted 19 members of our family there.

If you don't belong to our family, chances are you belong to the Ermakov family.  Father Dimitri Ermakov, the current priest at the absolutely divine Holy Dormition Church in not so divine downtown McKeesport, was the only son and youngest child of Father (yes, dad was a priest too) Dimitri (yes, his name was also Dimitri) Ermakov of eternal memory and his wife, Martha.  Four sisters arrived before the only son.  Father D the younger also produced five children, four girls first and then finally a boy--yes, his name is Dimitri, too.  So you get the point--this family also produced a wild number of cousins, many of which were at the church picnic.  The three oldest Ermakov girls were flower girls in our wedding.  Now they are 25, 23, and 20--sigh.

I counted 12 Ermakov family members at the picnic.

My kids knew no one at the picnic really--but they had a blast.  All the cousins from all the families came together into one happy group like they had known each other forever, just like my husband's cousins would do back in their day.  After this trip I realized how important it was for my kids to have these folks in their lives.

I said before that the only reason to come to McKeesport is to see family, which for us turns out to be a pretty darn good reason.

And now for some pictures!!
﻿﻿﻿
﻿ Thank you for reading this post!  I am still hoping in the very near future to crank out some posts about Hershey, Philadelphia, PA Dutch Country and the Pocono Mountains!